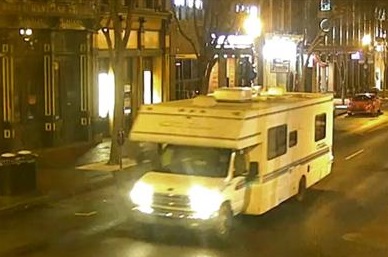 The man suspected of setting off the explosion that rocked downtown Nashville, Tenn., on Christmas morning died in the blast, authorities confirmed Sunday.
U.S. Attorney Donald Cochran at a press conference also officially identified the suspect as Anthony Warner, 63.
The Tennessean reported that authorities identified Warner through DNA found at the scene of the explosion. Officials said there is no indication anyone else was involved in setting up the blast.
Authorities have yet to say whether they consider the bombing domestic terrorism.
FBI agents searched Warner’s home in Antioch, Tenn., on Friday as well as the Fridrich & Clark Realty office in the affluent area of Green Hills, the Tennessean reported.
"We are one of the nearly 500 people who so far have contacted them with tips," said the real estate firm's owner Steve Fridrich.
Speaking to the Tennessean, Fridrich confirmed that Warner had previously been employed at his company. Fridrich said Warner began working as a contract laborer for computer consulting, the newspaper reported, until he informed the company in December he would no longer be working there. According to Fridrich, no reason was given as to why he quit.
“He didn’t have a computer or office here. If a computer went down he would fix it or if we got a new one in he’d put it together for us,” added Fridrich. “He'd come by once a month to the office to do work. But there were also months we went without seeing him. He also worked for other companies doing computer work.”
Records obtained by The Tennessean indicate that Warner's family has had a presence in Nashville for several decades.
Authorities are investigation possible motives and looking at Warner's ideologies and beliefs.
Nashville Mayor John Cooper (D) said earlier Sunday that the bombing was an "attack on infrastructure."
Some previous, unconfirmed reports indicated that Warner may have been motivated by conspiracy theories involving 5G technology
The recreational vehicle that exploded was parked near the iconic AT&T building in downtown Nashville, dubbed the "Batman building" by locals for its distinctive shape.
The massive explosion disrupted thousands of AT&T customer connections across several states, preventing some businesses from using credit card machines or operating at all. Additionally, 911 calls in several counties were down for extended periods of time in Tennessee, and flights in and out of Nashville's airport were canceled for much of Friday due to system outages.
National