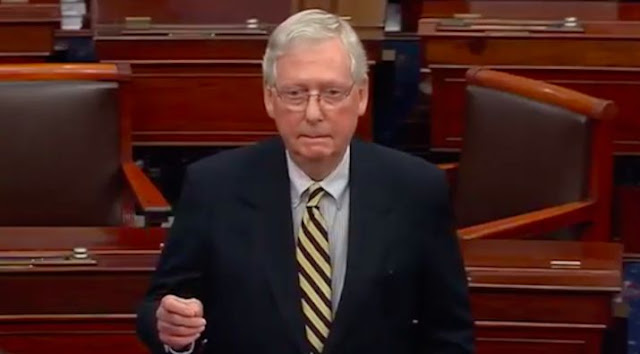 The Alpha Predator of Politics may be turning into the prey. And in this case, the replacement predators will turn out to be Bernie Sanders and Chuck Schumer at the rate things are going.
As anticipated, after blocking a unanimous consent vote on $2,000 relief checks, Mitch McConnell “began the process” last night by introducing his own bill into the regular order of business in the upper chamber. The proposed legislation would increase the payments to $2,000 as the House already moved to do with the President’s support. But it includes the two other contentious issues that the president wanted. The bill would repeal Section 230 and establish a commission to investigate the results of the 2020 election. Both of these will receive pushback from the Democrats and could bog down the process.
Associated Press:
Saying little, McConnell signaled an alternative approach to Trump’s checks that may not divide his party so badly, but may result in no action at all.
The GOP leader filed new legislation late Tuesday linking the president’s demand for bigger checks with two other Trump priorities — repealing protections for tech companies like Facebook or Twitter that the president complained are unfair to conservatives as well the establishment of a bipartisan commission to review the 2020 presidential election he lost to President-elect Joe Biden.
“The Senate will begin a process,” the GOP leader said. He said little more, only that he would bring the president’s demand for the $2,000 checks and other remaining issues “into focus.”
Even if the votes exist to pass McConnell’s bill (which is far from certain), if it has to go through all of the normal committee reviews and debate prior to a full vote on the floor, that’s going to take up time that the Senate simply doesn’t have. Tomorrow is the end of the year. On Monday, at noon, everything turns into a pumpkin. This session of Congress will end and the new class will be seated. Any legislation that’s still in the pipeline will expire and new bills will have to be submitted, with the process starting all over again.
Meanwhile, Bernie Sanders and Chuck Schumer are still holding the NDAA veto override hostage until the $2,000 check issue is rammed through. They’re not showing any signs of backing down, so that means both the pandemic relief checks issue and the entire defense spending bill will have to go back to the drawing board. These details can still keep Loeffler and Perdue off the campaign trail and, as Ed pointed out, the voters of Georgia might decide to take it out on them if no action is taken.
It’s tough to understate how badly McConnell and the Senate GOP have been outmaneuvered by Sanders and Schumer here. And the worst part is that Sanders was telegraphing his punches from the beginning. He gave an interview before he brought up the filibuster idea, flatly admitting that he was doing this, at least in part, to mess with the Republicans’ prospects in Georgia.
There are really only two ways this horror show ends at this point. Even in a “best case” scenario, McConnell’s bill goes through, but he winds up backing down to the President and the Democrats on key items he had firmly opposed. (The larger relief checks and Section 230.) Alternatively, the bill dies and no action is taken on any of those issues and they fail to override the NDAA veto so the military isn’t funded. Add to that the possibility that both Loeffler and Perdue could wind up losing their seats, in which case any “fresh start” for all of this legislation will take place with the Democrats holding the majority and calling the shots in both chambers.
I’d love to propose an easy out for McConnell but there doesn’t seem to be one at the moment. The best he could probably do is swallow his pride and go back to unanimous consent on only the $2,000 checks, allowing him to then override the veto on the same day. He can put the Section 230 language and the election investigation committee into a separate bill, knowing that it’s not going to go anywhere. Sometimes you have to recognize that discretion is the better part of valor and just take what’s on the table. That appears to be where Cocaine Mitch is this morning.
Opinion