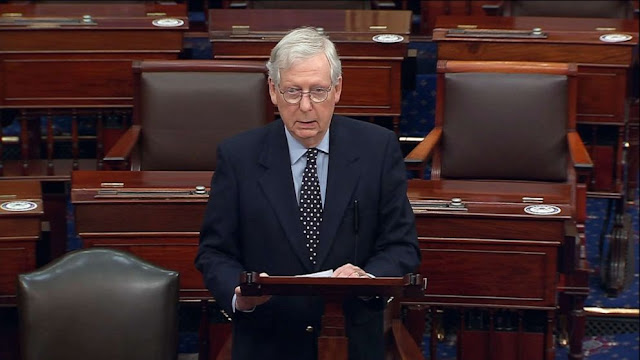 Senate Majority Leader Mitch McConnell (R-Ky.) on Tuesday blocked an attempt by Democrats to set up a stand-alone vote on increasing the amount of recently passed stimulus checks from $600 to $2,000.
Senate Democratic Leader Charles Schumer (D-N.Y.) and Sen. Bernie Sanders (I-Vt.) both tried to get consent for the Senate to bring up legislation that passed the House in a 273-134 vote on Monday.
The GOP leader did not directly address why he objected, but under the Senate's rules any one senator can block efforts to set up votes or pass bills.
McConnell signaled separately that he could package the increase in direct stimulus checks, with a repeal of a tech shield that has emerged as a top target for Trump and election-related investigations. Trump, in his statement on signing the $2.3 trillion package, said the Senate would "start the process for a vote" that tackles the three issues.
"During this process, the president highlighted three additional issues of national significance he would like to see Congress tackle together," McConnell said.
"Those are the three important subjects the president has linked together. This week the Senate will begin a process to bring these three priorities into focus," he added.
McConnell did not provide additional details about how he might bring the measures up. But tying the stimulus checks push to Section 230, a legal shield for tech companies, or to Trump's unproven claims that widespread election fraud cost him his reelection would almost certainly undermine Democratic support for such legislation.
But Democrats want a stand-alone vote on a bill to increase the stimulus checks from $600 to $2,000.
"The fastest way to get money into Americans' pockets is to send some of their tax dollars right back from where they came. Two-thousand dollar stimulus checks could mean the difference between American families having groceries for a few extra weeks or going hungry," Schumer said, before unsuccessfully trying to pass the House bill.
Sanders tried to set up a vote on the House bill for Wednesday. When McConnell objected, Sanders blocked the GOP leader from scheduling a quick vote on overriding Trump's veto of the National Defense Authorization Act (NDAA).
He added that "the leaders of our country, President Trump, President-elect Biden, Minority Leader Chuck Schumer, the speaker of the House Nancy Pelosi are all in agreement. We have got to raise the direct payments to $2,000.
National