Many copied him, but there was only one Chuck Yeager 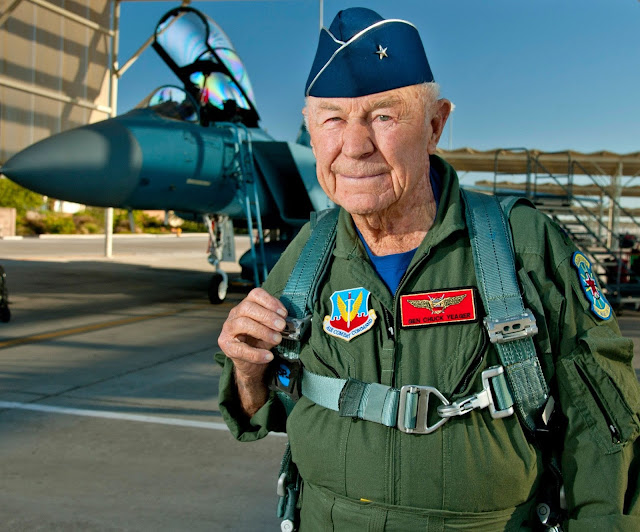 Chuck Yeager was an American original who spawned many copies.
Yeager, who died Monday in Los Angeles at the age of 97, is best known as the first man to break the sound barrier — and he did it with two broken ribs.
Out for a late-night horseback ride after having a few beers at a bar near the Air Force base where he was stationed, Yeager sustained the injury when he crashed into a fence. He didn’t even consider letting someone else make the barrier-breaking flight, which was scheduled for just two days later. He had a doctor tape up his ribs, and a friend and fellow pilot rigged his X-1 so that he could close its cockpit. Then, he climbed into his X-1 and, after being detached from a B-29 23,000 feet above the Mojave desert, shot forward, eventually reaching 700 mph.
Anyone who would question why Yeager chose to get drunk and ride a horse around the desert days before the biggest flight of his life is not in possession of what Tom Wolfe called “the right stuff,” in his iconic book of the same name. Yeager had that vanishingly rare mixture of technical expertise, guts, and boredom with life outside of the cockpit in spades. Other pilots of all kinds so looked up to him that, according to Wolfe, they started imitating his backwoods West Virginia drawl, which is why any member of the flying public can do a decent impersonation of Yeager, even if they’ve never heard of him.
“It was,” Wolfe wrote, “the drawl of the most righteous of all the possessors of the right stuff: Chuck Yeager.”
In order to understand Yeager and the men he flew with, you have to understand just how dangerous it was to be a test pilot in the mid 20th century. According to Wolfe, 53 percent of career test pilots died in the cockpit — and that’s just training accidents; it doesn’t include those who died in combat during the century’s various wars. Yeager was famously unperturbed about the prospect of dying in flight. That fearlessness was part of what made him so successful.
“I’ll be back all right — in one piece, or a whole lot of pieces,” he told Time in 1949.
This was not empty bravado; by 1949, Yeager had already had a number of brushes with death.
In 1941, aged 18, Yeager joined the Air Force in an effort to avoid getting his “hands dirty as an Army mechanic. Three years later, on his eighth mission flying P-51 Mustangs, he was shot down over German-occupied France. Members of the French resistance found him and connected him with a fellow American who had also been shot down. The two men hiked through the Pyrennes toward neutral Spain, eventually taking shelter in a cabin. German soldiers were alerted to their presence when Yeager’s partner hung his socks outside to dry. The Germans opened fire on the cabin and the two men narrowly escaped through a window, but not before Yeager’s new friend was shot in the knee. Yeager amputated part of the man’s damaged leg and carried him through the mountains to safety.
Although most combat pilots who were assisted by the French resistance were barred from returning to the skies, due to concerns that they might jeopardize their helpers’ identities if captured again, Yeager was given a special dispensation by Dwight D. Eisenhower after somehow finagling a meeting with the allied commander.
“I just wanted to meet two guys who think they’re getting a raw deal being sent home,” Eisenhower told Yeager and another pilot who had been shot down, Yeager later recalled.
The consummate pilot returned to his cockpit on October 12, leading three fighter squadrons on a bombing run over Germany. He downed five German planes, earning the coveted status of ace in just one day. One month later he downed four planes in one day.
Outside of pushing cutting-edge aerospace technology to its limits in training flights, combat was considered the ultimate test for a fighter pilot, and Yeager leapt at the chance to get back in the saddle when the Vietnam War broke out.
By then a celebrity thanks to his record-breaking supersonic flight — but not yet the legend that Tom Wolfe would make him upon publication of The Right Stuff in 1979 — Yeager commanded a fighter wing and flew 127 missions in the Vietnam War. He retired as an Air Force brigadier general in 1975, before receiving a ceremonial promotion to the rank of major general in 2005. There won’t be another like him.
Rest in peace.
Opinion