Local government debt in Texas comes out to $12,500 per citizen 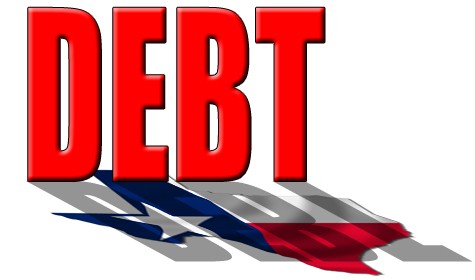 When spending, by government or an individual, eclipses revenue, debt becomes the tether by which one is tied — something quite familiar to Texas local governments. As of 2019, they collectively amassed $367.4 billion in outstanding debt.
Local government debt in Texas is $12,500 per citizen, ranking second among the 10 most populous states.
About 35 percent of that total lies in interest on principal borrowed.
Broken down by political subdivision, school districts and cities account for 37 percent and 31 percent of the outstanding local debt, respectively. Water districts, collectively, place a distant third at 13 percent.
A partial explanation for such a wide gap is that cities and school districts are far more numerous than other categories.
Interest makes up more than one-third of school districts’ $138 billion outstanding debt.
While school districts account for the largest share of collective debt, only six out of the top 20 are ISDs.
Dax Gonzalez, spokesman for the Texas Association of School Boards (TASB), said specific types of debt can finance various kinds of projects. Tax revenues from the Maintenance & Operations rate can go toward teacher salaries, gas for school buses, and more everyday expenditures.
Meanwhile, the Interest & Sinking rate finances structural projects such as new buildings, security upgrades, or network upgrades.
“School board members go through an extensive community process gathering input from their constituents when making decisions on whether to issue these bonds,” Gonzalez stated.
Due to the pandemic, Gonzalez said that the public’s perception of acceptable debt shifted. For example, operations-focused bond support remained somewhat steady while support for athletic projects waned.
Former Irving ISD School Board President Steven Jones said, “When I was first elected in 2011, IISD had a debt load of over $940 million. At one of my first meetings, the administration started discussion about the next bond election.”
Irving ISD currently has an outstanding debt of $550 million.
He further added that since he took a hardline stance against additional bond elections, Irving ISD has not put forward another one.
Asked whether concern among school districts over amassed debt is amplified after the economic downturn caused by the pandemic and government-mandated shutdowns thereof, Gonzalez said he was not aware of any specific district especially concerned about that.
One reason is that ISDs gain much of their funding from property taxes which are not nearly as affected by economic downturns, unlike consumption taxes which are explicitly tied to commerce.
Gonzalez added, “Districts operate with a lot of uncertainty because of fluctuating factors that affect forecasts by the district.”
Due to the max student to teacher ratio set by the state — currently 22 to 1 — if school districts take in more students, their costs increase automatically. However, waivers from the state can be issued on that requirement.
Something that may affect the state more than individual school districts this year is that the cap set by House Bill 3 — a 2.5 percent property tax increase, down from eight percent — will decrease the amount of money ISDs send back above their set “funding per student” threshold.
This process is called “recapture,” colloquially known as “Robinhood,” and, Gonzalez posits, the less money returning to the state from ISDs, the heavier the funding burden it will shoulder.
Going through its own serious, but brighter than originally projected, tax revenue problems, fiscal strains are not going away. Whatever the legislature decides to do after its significant reforms passed in 2019, including billions of school finance dollars injected into education, will have all eyes watching.
Gonzalez concluded, saying, “These districts have undertaken the monumental task of trying to keep kids educated during this pandemic. A student’s education is more an investment than a cost, and we’ll consider emerging from the session with even a level amount of funding a win.”
Jones, meanwhile, did not mince words with the association that nominally represented him during his tenure. “School boards are trained by TASB to be puppets for the administration. Most administrators are constantly looking ahead to the next bond election,” he emphasized.
“Things will not change until the elected school board members start thinking for themselves and the taxpayers.”
Most debt issued by political subdivisions is approved in some form by voters. But certain types of entities — namely cities, counties, and hospital districts — can issue non-voter-approved debt called “certificates of obligations” (CO).
There is currently $22.6 billion in outstanding CO debt in Texas.
Another factor straining the state’s fiscal health is its unfunded liability obstacle. An unfunded liability refers to any financial promise made by a government entity for which it has not set aside the funding. The most common example of this is a pension system.
Some states find themselves buried six feet under a pension mess of their own making. Illinois’ $241 billion unfunded liability total tops the list. Texas is much more solvent relative to the Land of Lincoln, but still faces $86 billion in total unfunded liabilities.
Unlike other entities that have racked up $20 billion in unfunded liabilities, school districts do not handle their own pension systems which are run at the state through either the Teachers Retirement System.
So, the school district debt total rises high without contribution from unfunded pension liabilities.
Many localities feel prepared to meet their financial obligations despite the pandemic, but many still have been forced to adjust out of fiscal stress.
Texas