Ken Paxton looking for a pardon from President Trump? 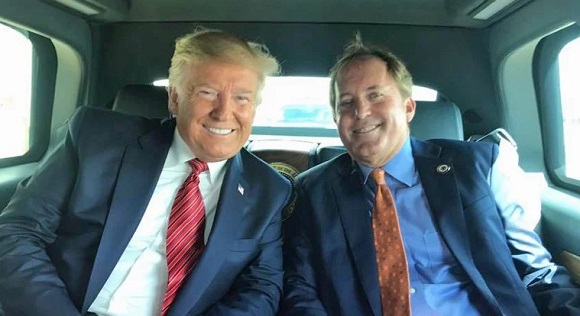 Texas Attorney General Ken Paxton has filed a long-shot lawsuit asking the U.S. Supreme Court to throw out the election results from four battleground states won by president-elect Joe Biden.
Officials in those states — Georgia, Michigan, Pennsylvania and Wisconsin — derided the filing as an irresponsible publicity stunt. Paxton, a hyper-partisan ally of President Donald Trump, is 2020 co-chair of the Lawyers for Trump coalition.
"Mr. Paxton’s actions are beneath the dignity of the office of Attorney General and the people of the great state of Texas," Michigan Attorney General Dana Nessel said in a statement Tuesday.
In the suit, Paxton — currently under indictment for securities fraud and facing an FBI investigation over allegations of bribery and abuse of office — claims recent changes to election rules in the states violated federal law. As a result, he's asking the high court to block their votes in the Electoral College.
The last-minute filing comes as courts have rejected numerous suits by Trump and his surrogates to throw the election. Recounts in battleground states also have turned up no credible proof of vote rigging, and Trump's own attorney general has publicly stated that the Justice Department found no evidence of widespread election fraud.
"The allegations in the lawsuit are false and irresponsible," Georgia Deputy Secretary of State Jordan Fuchs said in a statement. "Texas alleges that there are 80,000 forged signatures on absentee ballots in Georgia, but they don’t bring forward a single person who this happened to. That’s because it didn’t happen."
Critics also questioned whether Paxton is wading into the election lawsuit frenzy in a bid to grab a pardon from the outgoing president.
Timeline of Allegations Against Ken Paxton
10/3/20: Seven top Republican aides to Ken Paxton, including his second-in-command, Jeff Matteer, allege to federal law enforcement that Ken Paxton committed numerous violations of the law, including abuse of office, bribery, and improper influence.
10/5/20: News media report that the allegations centered around Paxton unilaterally appointing an unqualified “special prosecutor” to investigate federal law enforcement officials who raided the offices of a top donor, Nate Paul.
10/5/20: Reports emerge that one of Paxton’s Deputy Attorneys General had sent a letter to the “special prosecutor,” alleging that his appointment was potentially illegal.
10/7/20: Reports surfaced that Paxton personally intervened in a case benefitting Paul, at the expense of a charity.
10/7/20: Some of Paxton’s top aides make public a letter detailing their allegations against Paxton, including the connection to Nate Paul. The letter reports that Paxton’s actions were “unconscionable.”
10/8/20: Reports surfaced that on Aug 1, Paxton personally ordered a “rushed written legal opinion” that could “possibly protect assets belonging to” Paul.
10/13/20: Paxton breaks his silence to the “little known legal outlet called the Southeast Texas Record.” The Record is later identified as part of a “pay-for-play news” network that has received millions from Republican organizations.
10/20/20: One of the seven whistleblowers, Lacey Mase, reported that she had been fired.
10/22/20: A second whistleblower, Blake Brickman, was fired. Firing the whistleblowers potentially will subject the state to civil legal liability, as whistleblowers fired 90 days after they report wrongdoing are presumed to be fired due to the report.
10/23/20: Paxton’s former second-in-command, Jeff Mateer, breaks his silence, claiming that he was “shocked” at Paxton’s behavior, believing it to be something “no attorney general has ever done.” At the same time, the Dallas Morning News reports that Paxton personally involved himself in a request for records related to the FBI raid on Nate Paul.
10/23/20: Media reports that four out of the seven whistleblowers were either sidelined or outright fired.
10/28/20: The media reports that all seven of the whistleblowers, in addition to Paxton’s Chief of Staff, either resigned, were fired, or put on leave.
11/5/20: A new report surfaces that Paxton had an extramarital affair with a State Senate aide for whom he later secured a job with Nate Paul–providing a personal motive for Paxton’s potentially illegal actions.
11/8/20: The Dallas Morning News, the most conservative of Texas’s major-market newspapers, calls for Paxton’s resignation.
11/13/20: Four of the fired or reprimanded whistleblowers file a retaliation lawsuit against the Office of the Attorney General.
Indictment: State Charges
5/2/14: Then-State Senator Ken Paxton admits to soliciting investment clients without being registered, resulting in a $1,000 reprimand from the State Securities Board.
11/14/14: Paxton is elected Texas Attorney General
7/1/15: The media reports that the Texas Rangers are investigating Paxton for first-degree felony state securities fraud, beyond what he admitted the previous year.
7/28/15: Paxton is indicted on three counts of felony securities fraud.
8/3/15: Paxton surrenders to law enforcement, is booked into Collin County Jail, his mugshot is taken, and he is released on a $35,000 bond
8/18/15: Paxton is re-indicted for first-degree felony securities fraud, and an additional charge of fraudulent misrepresentation is added.
1/12/17: Paxton’s trial is set for May 1.
4/11/17: Venue in Paxton’s trial was transferred from Collin to Harris County.
6/14/17: The Collin County Commissioners Court sues to halt payments to the Special Prosecutors trying the case
8/21/17: A Dallas Court halts payments to the Special Prosecutors.
10/4/17: Paxton’s trial is delayed again due to the ongoing dispute over prosecutor fees.
12/20/17: The Texas Court of Criminal Appeals agrees to hear the dispute over prosecutor fees, further delaying the trial.
11/6/18: Paxton narrowly wins another term.
6/19/19: The Texas Court of Criminal Appeals rules that the prosecutor fees fall outside the legal limits, further imperiling the case against Paxton.
7/27/20: After a Harris County judge attempts to move the case back to Collin County, another Harris County judge takes the case.
10/23/20: The Harris County judge sends the case back to Paxton’s native Collin County.
Indictment: Federal Charges
4/11/16: The SEC files federal securities fraud charges against Ken Paxton, alleging he pressured investors to invest in a company while not disclosing his own financial interest in the company.
10/7/16: A federal court dismisses the charges.
10/21/16: The SEC refiles the charges against Paxton, alleging he knowingly deceived members of his own investment group.
3/2/17: The same federal judge dismisses the refiled charges.
Opinion