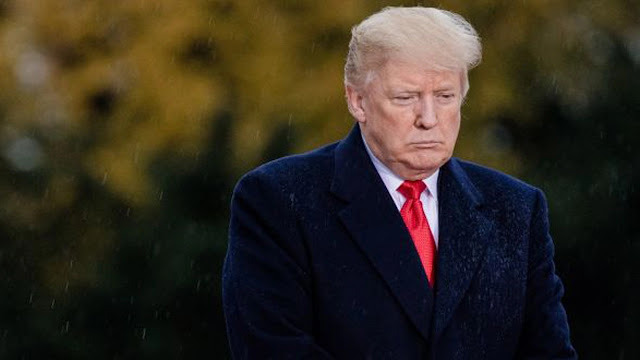 The House voted Monday to override President Trump’s veto of a must-pass defense policy bill, the first successful override vote of Trump’s presidency.
The House voted 322-87 to override Trump, easily surpassing the two-thirds majority needed to overcome a veto.
The action now moves to the Senate, which also needs to muster two-thirds support in order for Trump’s veto of the National Defense Authorization Act (NDAA) to be overridden.
The NDAA passed both chambers of Congress earlier this month with large bipartisan majorities, but it was unclear exactly how many Republicans would buck the president when it came to the override vote.
In the end, 109 Republicans broke with Trump to support the bill. Sixty-six Republicans voted against the bill Monday, compared with 40 who voted against it earlier this month.
But several Democrats also switched their votes, with 20 opposing the bill Monday, compared with 37 previously.
Ahead of the vote, Rep. Mac Thornberry (R-Texas), the ranking member of the House Armed Services Committee, urged his colleagues to vote for “the exact same bill” they did before, emphasizing that “not a comma has changed.”
“I would only ask that as members vote, they put the best interests of the country first,” said Thornberry, for whom this year’s NDAA is named in honor of his retirement at the end of this Congress. “There is no other consideration that should matter.”
Trump vetoed the bill last week over complaints it did not repeal an unrelated tech law he has fixated on as Twitter adds corrective labels to his posts making unsubstantiated allegations of widespread voter fraud in the 2020 presidential election.
Trump also opposes the NDAA’s requirement to strip the names of Confederate generals from military bases and provisions seeking to halt U.S. troop withdrawals in Afghanistan and Germany. He has also issued vague gripes about the bill being weak on China, despite myriad provisions aimed specifically at Beijing, including a new $2.2 billion counter-China fund.
Including the defense bill, Trump has issued nine vetoes during his presidency. Neither chamber of Congress has successfully voted to override any of the previous ones.
But Trump met his match in the NDAA, one of the few remaining bastions of bipartisanship in Congress.
Lawmakers are immensely proud of the bill’s 59-year streak of becoming law and do not want to be remembered as the Congress that failed to deliver. The $740 billion legislation authorizes funding for jobs, military bases and weapons manufacturers that affect nearly every congressional district and state. Troops would lose out on a host of special pay and bonuses without passage of the NDAA.
Lawmakers on both sides of the aisle have also been stressing the importance of cybersecurity provisions in this year’s bill after a massive hack suspected to have been carried out by the Russians compromised myriad government systems at key agencies.
“It is enormously important that we pass this bill,” House Armed Services Committee Chairman Adam Smith (D-Wash.) said on the House floor ahead of the vote. “We did it once. Let's just do it one more time, and then we can all go home for the year. We can be done, and we can be proud of what we have accomplished.”
Indicative of the importance lawmakers place on the bill, Congress returned for a rare post-Christmas session in order to meet a deadline to override the veto before noon Jan. 3, when the 117th Congress will be sworn in.
If the bill does not become law before the new Congress starts, lawmakers must start from scratch.
The Senate is scheduled to convene Tuesday to begin the process of overriding the veto.
The Senate’s final override vote is not expected for days, as any one senator who supports Trump’s veto could drag out the process using procedural hurdles, such as forcing a cloture vote. Senators have suggested the final vote could happen the morning of Jan. 3, hours before the new Congress starts.
Sen. Rand Paul (R-Ky.), who briefly held up passage of the NDAA earlier this month, has indicated he could similarly delay an override vote.
“I very much am opposed to the Afghan war, and I’ve told them I’ll come back to try to prevent them from easily overriding the president’s veto,” Paul told reporters last week.
The NDAA is just one way Trump scrambled the end of this legislative session and exposed fissures with congressional Republicans as he lashes out following his loss in the presidential election.
Trump caused a panic last week when he raised objections to a $2.3 trillion government funding and coronavirus relief package after it passed Congress, raising the prospect of a government shutdown. Trump demanded direct stimulus payments to Americans be increased to $2,000, an amount opposed by most Republican lawmakers.
Trump eventually signed the bill Sunday night, averting a shutdown, but not before unemployment benefits extended by the measure expired.
In a statement after he signed the funding and relief bill, Trump claimed the Senate would “start the process for a vote that,” among other things, “repeals Section 230,” the tech law he demanded be repealed in the NDAA. It's unclear if and when that may happen given the Senate is scheduled to be in session for just a few days before Trump leaves office, but the promise of a separate vote on Section 230 could give cover to Republicans overriding Trump on the NDAA.
Congress has overridden 111 vetoes throughout U.S. history. The last time a president’s veto was overridden was in September 2016 when then-President Obama opposed a bill allowing families of 9/11 victims to sue Saudi Arabia.
Obama vetoed the NDAA once, in 2015, over a budget dispute. Rather than try to override him, Congress passed a revised version later that year that Obama signed after a broader budget agreement was reached.
National