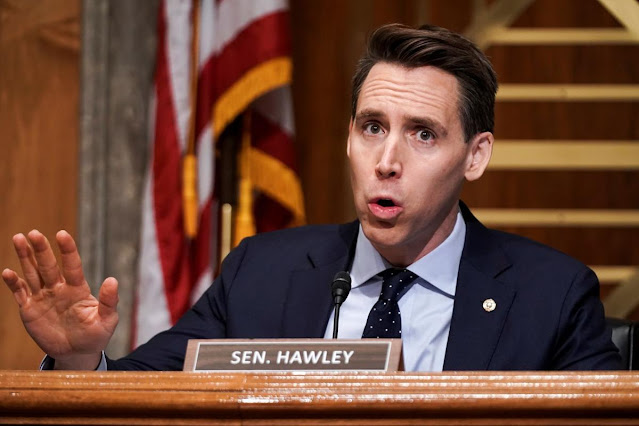 Sen. Josh Hawley (R-Mo.) said on Wednesday that he will object during Congress's counting of the Electoral College vote on Jan. 6, becoming the first GOP senator to back the effort by House conservatives.
The decision by Hawley would ensure a debate and vote in the House and Senate on the Electoral College results.
“I cannot vote to certify the electoral college results on January 6 without raising the fact that some states, particularly Pennsylvania, failed to follow their own state election laws," Hawley said in a statement.
"And I cannot vote to certify without pointing out the unprecedented effort of mega corporations, including Facebook and Twitter, to interfere in this election, in support of Joe Biden. At the very least, Congress should investigate allegations of voter fraud and adopt measures to secure the integrity of our elections. But Congress has so far failed to act," Hawley added.
His office didn't immediately respond to a question about which states he will object to next week.
Hawley's decision comes as a group of House conservatives, led by Rep. Mo Brooks (R-Ala.), have pledged to make a long-shot bid to overturn the results of the presidential election next Wednesday by objecting to the Electoral College results.
In order to force a debate and a vote on their objection to a state's results House members need the support of a senator who will also object — something they didn't have before Hawley's announcement.
It will be the third time Congress has had to debate an objection since 1887, according to the Congressional Research Service. The other two times, in 1969 and 2005, were ultimately unsuccessful in changing the results of the election and the objections were rejected.
Congress will convene a joint session on Jan. 6 to formally count the election results. If an objection has the support of both a member of the House and Senate, lawmakers split off into their respective chambers to debate it for up to two hours and vote on whether or not to uphold the objection.
The objection is not expected to win majority support in either chamber given opposition from Democrats and some Republicans, meaning the efforts in Congress to change the results of the election will fall short.
But GOP leaders in the Senate had hoped to avoid the fight altogether, with Majority Leader Mitch McConnell (Ky.) and members of his leadership team publicly urging Republicans against objecting during a conference call earlier this month.
The vote, Republicans worry, would put a host of GOP incumbents up for re-election in 2022 in a bind by forcing them to decide between throwing their support behind Trump's baseless claims of voter fraud, which many of them have publicly dismissed, or breaking with the president and opening themselves up to a bloody primary fight.
"I mean, in the Senate, it would ... go down like a shot dog," Sen. John Thune (R-S.D.) told reporters earlier this month. "I just don't think it makes a lot of sense to put everybody through this when you know what the ultimate outcome is going to be."
Hawley is seen as a 2024 presidential contender, and his move will put pressure on other Republicans who may be eyeing the race.
Several other GOP senators have not yet said if they will object, including Rand Paul (Ky.), Ted Cruz (Texas) and Tom Cotton (Ark.), who like Hawley are viewed as potential 2024 contenders.
Sen. Kelly Loeffler (R-Ga.), who is sticking closely to Trump ahead of her runoff election on Tuesday, hasn't said what she will do. Sen.-elect Tommy Tuberville (R-Ala.) is also drawing close scrutiny after his campaign manager said he was seriously considering objecting.
Democrats immediately panned Hawley's decision, accusing him of undermining the integrity of the election for his own political benefit.
"This is how you run for President on the Republican side in 2024. You join a coup attempt. Democracy will prevail," Sen. Amy Klobuchar (D-Minn.) tweeted.
Sen. Chris Van Hollen (D-Md.) said that Hawley's actions were " grossly irresponsible."
"He’s attempting to undermine our democratic process, fuel Trump’s lies about voter fraud, and delay the certification of Biden’s win. In the end, this reckless stunt will fail," Van Hollen said.
National