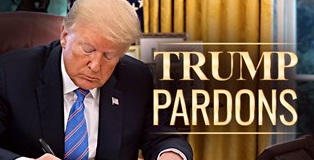 GOP Sen. Pat Toomey (Pa.) said Sunday that President Trump's pardons for Roger Stone, Paul Manafort and other loyalists convicted of various crimes were legal and constitutional, but a "misuse" of power.
Speaking with "Fox News Sunday" guest anchor Mike Emanuel, Toomey said that he disagreed with Trump's use of the pardon "in some cases."
"I think the case of Mike Flynn, for instance, was completely legitimate to pardon him because the prosecution was an abuse of power. I don't think Michael Flynn ever committed a crime," Toomey said, referring to the Trump's first national security adviser.
"But some of these other cases -- I mean, my goodness, we have tax fraud and bank fraud, witness tampering, obstruction of justice, but because they were close to the president, they got pardoned?" the senator continued, adding: "It is legal, it is constitutional but I think it's a misuse of the power."
The president sparked heavy criticism issuing pardons for Manafort and Stone, as well as three Trump-friendly former congressmen: Duncan Hunter (R-Calif.), Steve Stockman (R-Texas) and Chris Collins (R-N.Y.).
Toomey was also asked on Sunday if he agrees with recent calls to reform presidential pardon power, which the senator said would be difficult to achieve.
"Some are suggesting it's time to reform presidential powers. Do you agree?" asked Emanuel.
"You know, it's a good discussion to have but it's a tough call," the Pennsylvania Republican responded. "This is obviously a constitutional power, so I don't know how we would do it without amending the Constitution and I think...it would be very challenging."
Flynn pleaded guilty to lying to investigators about his contacts with Russia in 2017. Manafort, Trump's former campaign chair, was convicted of eight felonies in 2018 including tax and bank fraud. Stone, an informal adviser to the 2016 Trump campaign, was convicted of seven felonies in 2019 including witness tampering. The president pardoned Stone and Manafort as well as his son-in-law Jared Kushner's father, Charles Kushner, last Thursday while Flynn was pardoned in November.
Trump is reportedly considering preemptive pardons for his adult children and himself amid calls from Democrats for investigations after he leaves office.
National