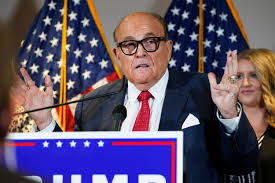 Rudy Giuliani, who has led President Trump's legal challenges to try to overturn the election, has tested positive for the coronavirus, the president said Sunday.
".@RudyGiuliani, by far the greatest mayor in the history of NYC, and who has been working tirelessly exposing the most corrupt election (by far!) in the history of the USA, has tested positive for the China Virus. Get better soon Rudy, we will carry on!!!" Trump tweeted.
Giuliani was admitted to Medstar Georgetown University Hospital in Washington, D.C. on Sunday, according to multiple reports.  However, additional details about his condition were not immediately available.
His son, Andrew Giuliani, who works in the White House, tweeted Sunday evening that his father was "resting, getting great care and feeling well. Thank you to all the friends who have reached out concerned about his well being."
Giuliani is the latest member of Trump's inner circle to contract the virus. Trump himself was infected and spent several days in the hospital in early October, and his chief of staff, multiple senior advisers, his press secretary, his campaign manager and his oldest son have all tested positive since.
The former New York City mayor is 76, putting him at a higher risk for serious complications from the virus.
Giuliani's diagnosis comes roughly two weeks after Andrew Giuliani tested positive for the coronavirus. He held a lengthy, indoor, maskless press conference in late November with, among others, Trump campaign adviser Boris Epshteyn, who tested positive for COVID-19 shortly thereafter.
But the former New York City mayor opted not to quarantine in the time since as he serves as the lead lawyer for Trump in his unsuccessful bid to undermine the election results.
Instead, Giuliani has been traveling to battleground states and appearing at campaign events where he and some GOP lawmakers have levied allegations of voter fraud and argued that President-elect Joe Biden's victory is invalid. Giuliani has been to Michigan, Pennsylvania and Arizona in the past two weeks alone.
Giuliani has failed to produce any evidence of widespread fraud in court, with judges in Nevada, Arizona, Pennsylvania, Georgia, Wisconsin and Michigan all dismissing cases for lack of standing in recent weeks.
Trump has refused to concede defeat in the election, insisting without evidence that it was stolen or rigged. Attorney General William Barr said last week that his department has not seen any evidence thus far of widespread fraud that would change the outcome.
National