Get ready for the Trump Show 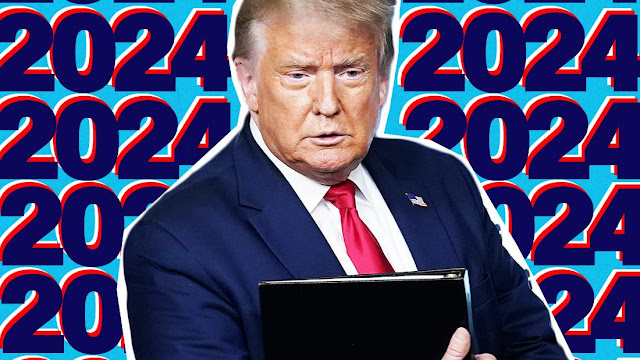 To the media, President Trump is the "Hotel California" of public figures: You can check out any time you like, but you can never leave.
And if reports that Trump will kick off a 2024 campaign during President-elect Biden's inauguration next month are any indication, expect that campaign – complete with massive rallies and daily tweetstorms around allegations of a stolen election – to last a mere 1,385 days until the next presidential election on Nov. 5, 2024.
For the media, this is a dream scenario, because no public figure in U.S. history has generated the kind of attention and ratings that Trump does. If he were to leave quietly like the last Republican president to exit office, in the form of George W. Bush, the American press would have (relatively) little to speculate and piously opine about.
But Trump has no filter. He has nearly 90 million Twitter followers, which is about equal to the populations of France and Australia combined. The four-year campaign will begin before Biden is even sworn in and will continue on an hourly basis, complete with regular TV and radio interviews.
Off-year? There will be no off-year. Nothing stops.
Meanwhile, it will be quite easy for Trump to attract the lion's share of attention, because a Biden administration will consist of a fraction of the access we witnessed over the past four years. Daily interaction with the media via press conferences and gaggles will be relatively non-existent. We know this because Biden doesn't even call on reporters himself during rare press conferences; instead, he has a staffer call on a predetermined list of reporters who his team feels won't take the 78-year-old out of his safe space by asking a challenging question. Vice President-elect Harris has yet to hold any solo press conferences or press gaggles since being chosen as Biden's running mate 112 days ago.
And since Trump will put himself front-and-center in likely launching a rematch campaign that may or may not include Biden (who has floated the idea of a one-term presidency), the former vice president gets an easy out since a majority of the questions will be about what Trump said, what he tweeted or what criticism he leveled at a Biden administration. The 46th president gets to respond by criticizing Trump for inheriting X and Y problems related to COVID-19 or poor race relations, and it's like "Seinfeld" all over again: a show about nothing.
As a result, we likely won't hear or see much meaningful scrutiny of Biden's positions on trade, education, immigration, automation, foreign policy, gun policy, tax policy or law enforcement. All sizzle, no steak.
We also got a preview during the early days of the Obama-Biden administration of what kind of access we'll see moving forward. At one point, while the financial crisis still mired the country in double-digit unemployment and Democrats were pushing hard to pass the Affordable Care Act, President Obama decided to diss an otherwise-friendly press for 308 straight days without holding a solo press conference.
For those keeping score at home, 308 days is a full-term pregnancy with one month to spare. One could also walk across the U.S.A. and back in that amount of time. Expect more of the same in a Biden-Harris administration, if the 2020 campaign was any indication.
Jan. 20 is supposed to mark the moment when the U.S. inaugurates a new president as the predecessor quietly leaves the stage. But "quiet" and "Donald Trump" rarely appear in the same sentence.
Like a roof, the 2020 election will simply shingle into the 2024 election.
It's what the media quietly wants.
It's what the 45th president definitely wants.
Nothing stops. Nothing.
It's the never-ending "Trump Show" — where you can check out anytime you like, but you can never leave.
Opinion