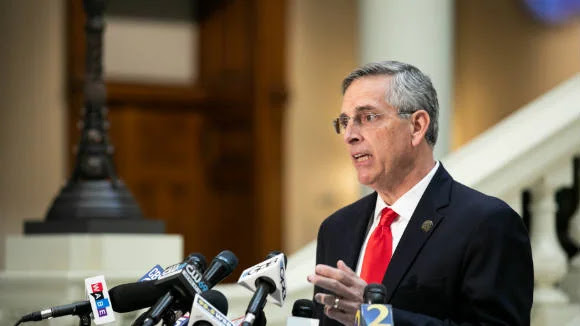 Georgia's secretary of state on Wednesday placed blame for threats election workers in the state have reportedly received at the feet of President Trump.
“Even after this office requested that President Trump try and quell the violent rhetoric being born out of his continuing claims of winning the states where he obviously lost, he tweeted out: ‘Expose the massive voter fraud in Georgia.' This is exactly the kind of language that is at the base of the growing threat environment for election workers who are simply doing their jobs," Georgia Secretary of State Brad Raffensperger (R) said during a press conference.
Since President-elect Joe Biden was declared the winner of the election last month, Trump and his allies have accused Georgia election officials of allowing a "rigged" voting system that led to widespread fraud and an unfair result.
Raffensperger and other officials in Georgia have said after multiple recounts there is no evidence of the kind of mass voter fraud Trump has alleged.
On Tuesday, the state's Republican voting system manager issued a similarly scathing rebuke of Trump's attacks against elections officials there.
“Mr. President, it looks like a likely loss in the state of Georgia,” Gabriel Sterling said. “We’re investigating. There’s always a possibility. I get it. You have the rights to go through the court. What you don’t have the ability to do — and you need to step up and say this — is stop inspiring people to commit potential violence. Someone’s going to get hurt. Someone’s going to get shot. Someone’s going to get killed. It’s not right."
Raffensperger previously said his wife had received threatening text messages during the state's recount process, with one warning: “You better not botch this recount. Your life depends on it.”
Another message, he said, read: "Your husband deserves to face a firing squad."
The Republican secretary of state said last week he and his family voted for Trump and he feels "thrown under the bus" by the president.
Trump has also attacked the Republican governor of Georgia, Brian Kemp, for allowing the state to certify election results, saying he is "ashamed" he endorsed his gubernatorial bid.
"Everything has to be approved by the legislature, and they had judges making deals, and they had electoral officials making deals like this character in Georgia who’s a disaster," Trump said on Sunday. "And the governor’s done nothing. He’s done absolutely nothing. I’m ashamed that I endorsed him. But I look what’s going on. It's so terrible."
Biden is the first Democratic presidential candidate to win Georgia since 1992.
National