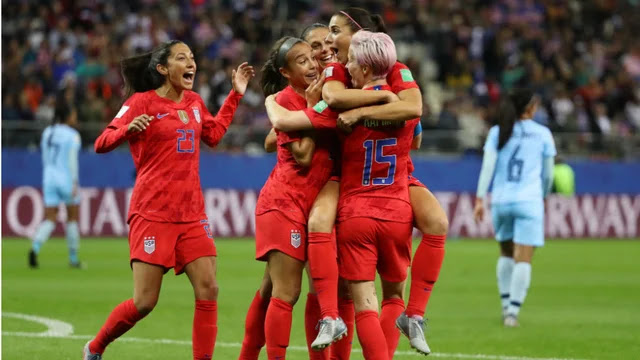 Players from the Women’s National Soccer Team on Tuesday reached a settlement with the U.S. Soccer Federation in their lawsuit claiming inequitable working conditions.
According to The Associated Press, the two parties filed a redacted public notice of settlement with the federal court in Los Angeles on Tuesday while providing the complete agreement to U.S. District Judge R. Gary Klausner.
The agreement does not include the team's argument of unequal pay, which Klausner dismissed in a May ruling, arguing that the women rejected a pay-to-play structure like the men’s agreement and also accepted greater base salaries and benefits.
However, Klausner said in May that he would allow for the allegations of discriminatory working conditions to be brought to trial.
Tuesday’s settlement mandates that charter flights, hotel accommodations, venue selection and professional staff support for the women’s team should be equal to that of the men’s national team, according to the AP.
The agreement also leaves open the possibility for the players to bring their equal pay lawsuit to the 9th U.S. Circuit Court of Appeals.
“We are pleased that the USWNT players have fought for — and achieved — long overdue equal working conditions,” players’ spokeswoman Molly Levinson told the AP. “We now intend to file our appeal to the court’s decision, which does not account for the central fact in this case that women players have been paid at lesser rates than men who do the same job.”
Levinson added that the players “remain as committed as ever to our work to achieve the equal pay that we legally deserve. Our focus is on the future and ensuring we leave the game a better place for the next generation of women who will play for this team and this country.”
The players initially sued the soccer federation in March 2019 arguing that they had not been paid equally compared to the salaries given to the men’s team, even though the female players have had significantly more success in international tournaments like the World Cup.
In their initial filing, the women asked for more than $66 million in damages under the Equal Pay Act and Title VII of the Civil Rights Act of 1964.
However, Klausner ruled in May that “In sum, [US Soccer] has offered evidence in support of its Motion for Summary Judgment that the [women's national team] has been paid more on both a cumulative and an average per-game basis than the [men's national team] over the class period.”
The soccer federation had come under intense scrutiny after it claimed in court documents that female players were not as skilled as male players.
National