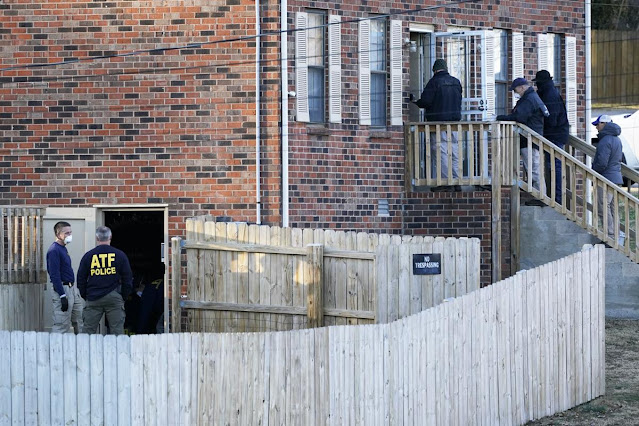 Federal authorities searched a home in Antioch, Tenn., in connection with the explosion that occurred Friday in Nashville, according to an FBI official.
The FBI has been searching a duplex located in the Nashville neighborhood collecting evidence in relation to the explosion of an RV Christmas morning, according FBI public affairs officer Darrell DeBusk, The Tennessean reported.
CBS reported earlier Saturday that law enforcement has identified a person of interest named Anthony Quinn Warner, citing law enforcement sources.
Multiple law enforcement officials with knowledge of the matter told ABC News that the properties are associated with Warner.
Nashville police officers responded to an emergency call of gunshots at 5:30 a.m. and found the recreational vehicle playing a recording, warning bystanders that it was going to explode. The RV exploded at 6:30 a.m.
The explosion resulted in injuries of at least three people and destroyed at least 41 businesses, with authorities labeling the incident an "intentional act."
Around 2:30. p.m. on Saturday, officers cleared the home for the search. DeBusk said that the home in Antioch was undergoing "court authorized activity."
No arrests have been made in connection with Friday's event yet, according to the news outlet.
According to reports from neighbors, an RV resembling the one in the bombing had been present at the building during the past two weeks. No vehicles matching that description were found on the premises Saturday, however, according to The Tennessean.
The news of the property search comes after officials announced that the past 24 hours have yielded more than 500 investigative leads in connection with the explosion.
The news also comes as Tennessee Gov. Bill Lee (R) requested federal assistance amid the fallout of the explosion. Lee, in a letter to President Trump posted on Twitter, asked the president for money after the state depleted much of their budget responding to larger incidents earlier in the year.
"Given these factors, the severity and magnitude of the current situation is such that effective response is beyond the capabilities of the State and affected local governments,” he wrote.
National