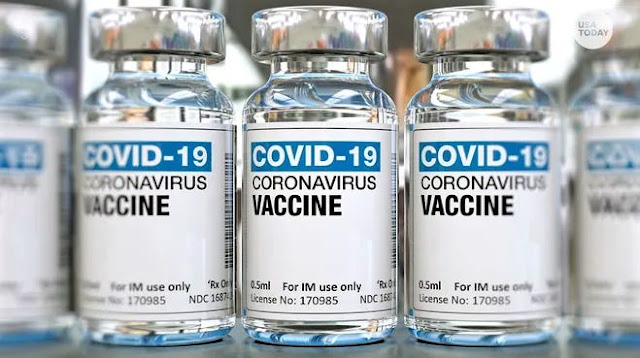 A federal panel of outside experts on Thursday endorsed a coronavirus vaccine from Pfizer and BioNTech, and recommended the Food and Drug Administration (FDA) move forward with emergency authorization.
The panel voted 17-4, with one abstention, that the safety and efficacy of the vaccine outweigh the risks for use in individuals age 16 and older.
The vote is an important step, as the country is poised to start an unprecedented vaccination campaign to stop the COVID-19 pandemic.
FDA doesn't necessarily have to follow the panel's recommendation, but it's widely expected to do so.
Peter Marks, the director of the FDA division overseeing vaccines, said Wednesday that a decision would come "days to a week" after the advisory panel meeting.
Once FDA gives the official green light, the administration plans to start shipping millions of doses to states across the country. Operation Warp Speed, the White House initiative to develop and distribute vaccines, has said it plans to begin shipping the vaccine within 24 hours.
The final step before shots can go into arms is a Centers for Disease Control and Prevention (CDC) vaccine advisory panel. An emergency meeting has been scheduled for Sunday. Once that panel gives the OK, vaccinations can start.
The FDA tipped its hand on a decision earlier this week, when reviewers on Tuesday endorsed the safety and effectiveness of the vaccine, finding it was 95 percent effective at preventing infection after two doses.
These findings were consistent across subgroups in the 44,000 person trial. The trial included people older than 65, people of various ethnicities, as well as people with other health conditions such as obesity, diabetes, hypertension and chronic cardiopulmonary disease.
The unprecedented demand for the public meeting led FDA to host it on YouTube. The commitment to transparency is key for the agency, as it needs to convince the public that the vaccine developed in record time is safe.
The U.S. needs to vaccinate close to 70 percent of the population to achieve herd immunity, and it's going to take time, even if the vaccine is widely accepted.
Officials like Anthony Fauci, the country's top infectious disease doctor, don't expect the majority of the population to get vaccinated until next spring or summer.
In the meantime, the death toll is going to rise. More than 3,000 people died on Wednesday, and CDC Director Robert Redfield said the upcoming months are going to be brutal.
“The reality is the vaccine approval this week's not going to really impact that I think to any degree for the next 60 days,” Redfield said Thursday. “We are in the timeframe now that probably for the next 60 to 90 days we're going to have more deaths per day than we had at 9/11 or we had at Pearl Harbor."
While there was evidence of protection after just one dose of the vaccine, Pfizer executives and FDA officials at the meeting emphasized there isn’t enough evidence to conclude a single dose of this vaccine would give the same long-term protection.
According to FDA, the main benefit of the vaccine is a reduced risk of COVID-19 at least seven days after completion of the second dose.
However, the data is limited as to just how much protection the vaccine gives. The vaccine technology is completely untested in humans, and the trials only have data from a couple months.
FDA's Dorian Fink noted that there are plenty of examples of vaccines that protect just as well against severe disease as they do against mild to moderate, and protection against disease of any severity is a "pretty good predictor" of what it means for severe disease.
Still, neither FDA or Pfizer has a large amount of evidence to show that the vaccine can protect against severe disease, or even how long protection lasts.
Data on how well the vaccine protects against asymptomatic infection is expected early next year.
Some committee members expressed concern that they were voting on recommending the vaccine for people as young as 16, even though they had limited evidence, which is what led to some of the "no" votes.
Panel member Paul Offit, director of the Vaccine Education Center at Children's Hospital of Philadelphia, said that sometimes decisions have to be made without knowing all the evidence
"It's not a question of when do you know everything, but when do you know enough?" Offit said. "We have clear evidence of benefit but only theoretical risk."
National