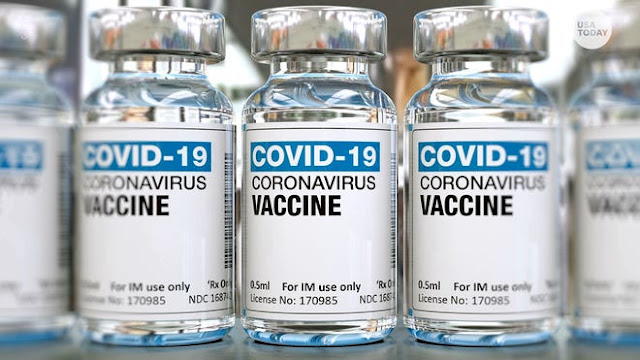 A second coronavirus vaccine is one step closer to being delivered, after a federal panel of outside experts on Thursday endorsed a coronavirus vaccine from Moderna, and recommended the Food and Drug Administration (FDA) move forward with emergency authorization.
The panel voted 20-0 with one abstention that the safety and efficacy of the vaccine outweigh the risks for use in individuals age 18 and older.
Based on the track taken by the vaccine manufactured by Pfizer and BioNTech, the FDA could grant emergency use authorization for the Moderna vaccine as soon as Friday.
Between Moderna and the vaccine from Pfizer/BioNTech, health officials said they expect to deliver enough doses to vaccinate 20 million people with the first dose by the end of the year.
Moderna's vaccine is anticipated to create fewer logistical challenges, as it does not require the same ultra-cold storage as Pfizer's vaccine. It can remain stable for up to 30 days at the same temperature as a standard refrigerator.
Gen. Gustave Perna, the CEO of Operation Warp Speed, on Monday said the administration plans to ship 6 million doses out to 3,285 locations across the country in the first week of the vaccine's authorization.
Unlike Pfizer, Moderna's vaccine was developed with federal financial support from Operation Warp Speed, which has invested $4.1 billion into its development and distribution.
The agency earlier this week confirmed that the two-shot dose of the vaccine was safe and 94 percent effective at preventing illness. The vaccine also showed evidence of preventing severe COVID-19, in addition to symptomatic infection.
There is also some evidence that the vaccine can prevent transmission of asymptomatic disease. However, Moderna's representatives at the meeting indicated there wasn't enough evidence to be sure.
During the meeting, panel members grappled with the question of whether Moderna should "unblind" its clinical trial, and give the vaccine to people who received the placebo during the trial.
It is not an issue the panel voted on, but it could have significant implications for the future of the clinical trial.
Moderna sent a letter to trial participants, informing them that if the vaccine gets authorized for emergency use, participants who were given a placebo will have the option to get the vaccine.
If the trial is unblinded, it could prevent researchers from being able to track the long-term effects of the vaccine.
Panel members also discussed reports that the Pfizer vaccine caused allergic reactions in two health workers in Alaska.
FDA and the Centers for Disease Control and Prevention are still investigating the cases, but have noted there's nothing in the vaccine that would traditionally cause an allergic reaction.
"We don't have enough information to make definitive recommendations one way or another ... and will consider whether additional recommendations need to be made," FDA's Dorian Fink said.
Fink added that the incidents "underscore the need to remain vigilant during the early phase of the vaccination campaign."
The FDA is working to change some of the paperwork given to health providers, and will emphasize the requirement that the vaccine be given somewhere with access to treatment for a severe allergic reaction.
National