Explosion in downtown Nashville believed to be 'intentional act' 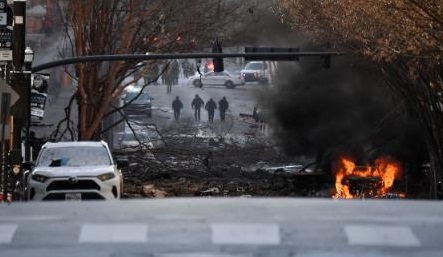 Emergency crews responded to an explosion early Friday in downtown Nashville that officials said was linked to a vehicle.
Police spokesman Don Aaron later said that investigators believe it was an "intentional act," The Associated Press reported.
Police said in a tweet the explosion was being investigated by the Metro Nashville Police Department and federal partners.
The Metro Nashville Office of Emergency Management told local station WKRN that a parked RV exploded in a riverfront entertainment district and damaged several buildings. Officials told the station that crews were assessing the damage and no injuries were immediately reported.
Photos of the area shared by the Nashville Fire Department show smoke and flames in the downtown area, and windows broken out in nearby buildings.
The fire department is asking the public to avoid the area.
The FBI and Bureau of Alcohol, Tobacco, Firearms and Explosives are also investigating, police said. Law enforcement has closed down downtown streets as the investigation continues.
Mayor John Cooper (D) called the explosion "unfortunate," but noted that fewer people were in the typically heavily trafficked area because it was early Christmas morning.
“It’s unfortunate, but any other morning I think it would’ve been a much worse story to be sure because there were so few people out,” Cooper said at a press conference.
National