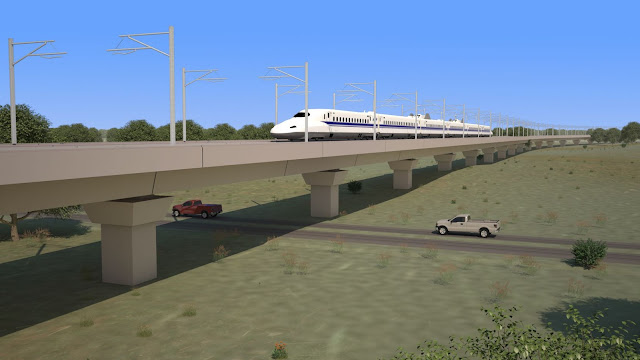 The controversy over a high-speed rail project between Dallas and Houston continues as the parties submit briefs to the Supreme Court of Texas (SCOTX) about the project’s ability to use eminent domain.
James Miles, a landowner in Leon County, whose land would be bisected by the planned 240-mile rail project, has filed his brief on the merits of the case as requested by SCOTX.
Miles asked the Texas Supreme Court to review a lower court ruling in his case because he believes Texas Central Railroad and its affiliates do not have the eminent domain authority to enter his property and survey it.
The case has been ongoing since 2017.
Eminent domain is the concept that the government has the right to take property for public use as long as it provides just compensation.
“The issues are surprisingly simple,” Miles’ attorney, Patrick McShan of the Beckham Group said. Texas Central is relying on two statues for eminent domain authority — that it is operating as a railroad company or that it is an interurban electric railway.
“Our position has been and remains that they are not an operating railroad,” McShan explained, noting that they have no rails, have never sold tickets, nor transported passengers.
However, in May the 13th Texas Court of Appeals ruled that Texas Central can exercise the power of eminent domain because it qualifies as operating a railroad and as an interurban electric railroad under Texas law.
Even though Texas Central has yet to lay tracks or carry passengers or freight, it has taken many necessary steps “to be able to create and operate a railroad in the future,” like coordinating with regulatory agencies, conducting land surveys, and entering into purchase agreements, the appellate court said.
Miles also asserts that Texas Central is not an interurban electric railway with eminent domain authority. “Texas Interurban railways have been extinct since 1947,” McShan said, “and the Texas Transportation Code contains the definition of a high-speed rail, but the legislature hasn’t granted eminent domain to high-speed railroads.”
In Texas, private property rights are highly valued and protected, the petitioner’s brief states. “This Court has repeatedly, recently, and unanimously recognized that strong judicial protection for individual property rights is essential to freedom itself,” it quotes from a Texas Supreme Court case in 2016.
“And this Court must step in once again to ensure that in the inevitable clash between infrastructure development by private entities and the property rights of individual landowners, the latter are given the protection the law requires.”
Kyle Workman, president and chairman of Texans Against HSR and the TAHSR Land Defense Fund, said in a press statement, “Jim Miles is absolutely on the right side of this. Texans deserve and demand for their property rights to be protected. We are confident the Texas Supreme Court will see the truth of how Texas Central is attempting to circumvent the law. This cannot be allowed in Texas.”
Texas Central is likely to file a response brief in late December or early January, followed by a reply from Miles. The parties then must wait for the Supreme Court to decide whether the court will review the case and grant oral argument. If it does, a decision is likely to be reached by summer 2021, McShan said.
Earlier this year, the Federal Railroad Administration (FRA) issued its final rule regulating the operating rules and practices, maintenance, and safety practices for Texas Central. It also issued the Record of Decision (ROD) related to environmental issues and the selected alignment of the route.
The FRA rules do not grant permission for Texas Central to begin construction but do allow it to proceed in making an application to the Surface Transportation Board, an independent federal agency charged with the economic regulation of railroads. The application requires public notice and may include conditions for construction.
Texas State Representative Steve Toth (R-The Woodlands) has pre-filed House Bill 114 regarding high-speed rail projects. It would not allow any state agency to grant permits or negotiate rights-of-way for high-speed rail projects until those projects have attained all the federally-required approvals.
In October, Governor Abbott wrote a letter to the Japanese prime minister publicly stating his support for the project. Texas Central’s system is modeled after the Central Japan Railway company’s Shinkansen N700. Abbott’s spokesman later clarified with The Texan, “From the beginning of this project, the Governor made clear that he could support this project if, and only if, the private property rights of Texans are fully respected and no state funding is used. The Governor’s team has learned that the information it was provided was incomplete. As a result, the Governor’s Office will re-evaluate this matter after gathering additional information from all affected parties.”
Texas Central did not reply to a request for comment by the time of publication.
Texas