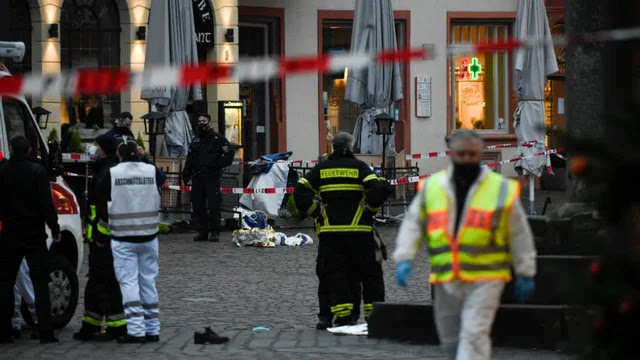 A driver going high speeds into a pedestrian zone in the southwestern German city of Trier killed at least two people and injured 15 others Tuesday.
Authorities stopped and arrested the man, identifying him as a 51-year-old German man from the area, The Associated Press reported.
Police questioned the man following the incident and said there is no immediate indication regarding the suspect's motive. Among the two reported fatalities was a young child.
Mayor Wolfram Leibe visited the site of the incident Tuesday, saying the man "drove through the pedestrian zone, clearly at high speed, and killed several people and injured several, some of them seriously."
Sky News reported Wolfram said some of the injured pedestrians suffered "severe injuries," though specific details about their conditions are not immediately known.
"I don’t want to speculate, but all of us are asking ourselves ... what drives a person to do something like this?" said Leibe. "Of course, I don’t have an answer to this question."
Authorities said the driver was alone in the vehicle, and investigators will keep the vicinity of the incident closed off until at least Wednesday morning to collect further evidence.
State interior minister Roger Lewentz lauded security forces for their prompt response at the scene Tuesday, saying they stopped the vehicle and apprehended the suspect within four minutes of receiving the first call.
In a statement on Twitter, Chancellor Angela Merkel's spokesman Steffen Seibert said, "Our thoughts are with the relatives of those killed and with the numerous injured, and with everyone currently on duty caring for them."
World