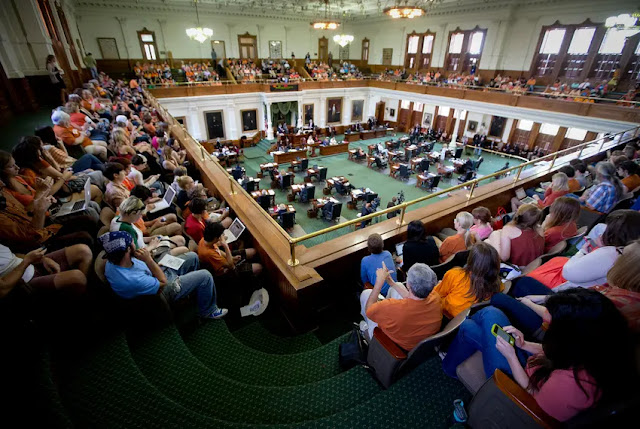 By Cassandra Pollock
As the latest discussions over how the Texas Legislature should operate during a pandemic continue to surface, Lt. Gov. Dan Patrick told members of the Texas Senate this week that people wishing to testify on legislation before a committee may need to register days beforehand and take a coronavirus test ahead of the hearing.
Patrick, the Republican head of the upper chamber, mentioned a number of possibilities to the Senate Democrat Caucus during a conference call Friday. Patrick said people may have to register online three days before a committee hearing to testify and take a rapid test for the virus 24 hours beforehand. People have typically been allowed to sign up to speak on a piece of legislation the day of a committee hearing.
Patrick said that the National Guard could test between 10 to 12 people at the Capitol in an hour. Once results are back, which could take up to an hour, persons cleared would be allowed into the building. He also mentioned that most committee hearings may only take place Tuesday and Wednesday — at least for the first 60 days of the 87th Legislature, which convenes in January.
Sherry Sylvester, a senior adviser to Patrick, told The Texas Tribune on Saturday that conversations are still ongoing about specific protocols and that Patrick and Republican state Rep. Dade Phelan, the likely next House speaker, have been in talks and “hope to be able to make an announcement regarding the Session shortly.”
A spokesperson for the Senate Democratic Caucus did not immediately respond to a request for comment. The Texas National Guard also did not immediately return a request for comment.
Patrick also said there is a possibility that senators may be allowed to only have one additional person, such as a spouse, with them on the Senate floor and another in the upper chamber gallery for the opening day of the Legislature in January — and that everyone must first be tested for the virus. The first day of legislative sessions are often celebratory — and crowded — affairs at the Capitol as family and friends gather around lawmakers and their desks on the chamber floor.
But Texas is now grappling with a surge of coronavirus cases, with the state reporting earlier this week that the number of Texans hospitalized with COVID-19 topped 9,000. The seven-day average of new cases has tripled since the beginning of October. The state could receive vaccine doses to give an initial dose to up to 1.4 million Texans this month.
For the past several months, both chambers have been in conversations over what practices should be in place when the Legislature convenes for the session, a 140-day stretch that typically draws thousands of people inside the Capitol for tours, testifying before committees or meeting with lawmakers. Discussions have included questions over the kind of access the public should have to the legislative process, which is expected to be particularly challenging in 2021 as state lawmakers grapple with shortfalls to the state budget, the pandemic and the oftentimes polarizing redistricting process.
Earlier this week, House Administrative Chair Charlie Geren, a Fort Worth Republican, gave the most public glimpse yet at how conversations are playing out in the lower chamber during a presentation to a lobbyist and government affairs group.
Geren, who later told the Tribune that “there’s nothing in concrete yet,” said there could be a limit on the number of people allowed inside the building and that the House was considering remote voting options for the tightly packed lower chamber’s 150 members, which would allow lawmakers to vote on legislation from elsewhere inside the building.
Patrick said during his meeting with Senate Democrats there were still questions over whether senators would be allowed to cast votes for legislation remotely, particularly if a member is in quarantine.
This article originally appeared at the Texas Tribune.
Texas