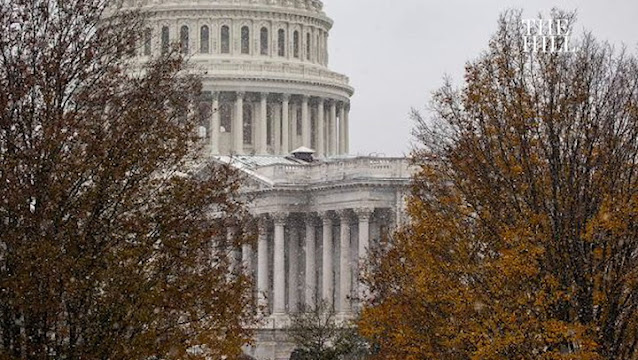 Congress unveiled a $2.3 trillion spending package Monday just hours before its expected passage in both chambers, funding the government though the end of the fiscal year and providing relief to a coronavirus-battered economy.
The package includes a $1.4 trillion omnibus bill based on a 2019 spending deal, which consists of $740.5 billion in defense spending and $664.5 billion for domestic programs.
It also includes a $900 billion COVID-19 relief bill, which congressional leaders agreed to over the weekend.
The combined $2.3 trillion package is among the largest spending bills ever considered by Congress and follows the $2.2 trillion CARES Act passed in late March.
While the COVID-19 relief bill focuses on extending unemployment, providing stimulus checks and boosting small businesses, the omnibus includes a broader set of policy issues, such as transportation, agriculture, health, homeland security and foreign operations.
“As I prepare to depart the House after 32 years of service, I could not be more pleased that we are concluding this Congress with a bipartisan agreement to provide the certainty of full-year funding for all of government and urgently-needed coronavirus relief to save lives and livelihoods,” said outgoing House Appropriations Committee Chair Nita Lowey (D-N.Y.), the first woman to lead the panel.
The includes several Democratic priorities previously approved by the House as well as provisions reflecting Senate GOP objectives.
It includes a 3 percent pay raise for the military and a 1 percent pay raise for the civilian federal workforce.
The National Institutes of Health would receive a $1.25 billion boost, raising the budget to $42.9 billion, while the Centers for Disease Control and Prevention (CDC) would get a $125 million boost, to $7.9 billion.
The omnibus also included $1.375 billion for 56 miles of President Trump’s border wall, an issue that has become a central obstacle in passing spending legislation during his presidency. That is the same amount approved last year, though President-elect Joe Biden is not expected to use billions in emergency defense funds to bolster the project like Trump has.
The omnibus does not include Democratic language that would have blocked Trump’s executive order lifting protections for civil servants and helping political appointees to remain in government posts after Biden takes office.
The legislation maintains several abortion-related restrictions, such as the long-standing Hyde amendment that prevents federal funds from being used for abortions.
While it doesn’t include the sweeping police reforms House Democrats approved following George Floyd’s killing in late May, it would provide $5 million to create a database to track police misconduct, and $153 million for programs to better community relations with police, a 77 percent increase from fiscal year 2020.
It also includes approvals for the Smithsonian to begin work on two new history museums on the National Mall, one dedicated to women’s history and the other to Latin American history.
On the tax side, Congress included provisions making it easier for people to receive earned-income and child tax credits, while also allowing businesses to write off 100 percent of business meals instead of the current 50 percent, and axing an excise tax increase on brewers and distilleries.
The year-end package included other major pieces of policy legislation, such as a bipartisan agreement on surprise medical billing and energy legislation that would restrict the use of hydrofluorocarbons, a greenhouse gas common in air conditioners. It is the first significant piece of climate legislation in over a decade.
But the bill’s unveiling on Monday afternoon gave little time for lawmakers, advocacy groups and constituents to see what’s in the final text before Congress votes on the measure. The timing drew criticism from across the political spectrum. Problems with uploading and printing the 5,593-page bill delayed its release further.
“5,600 pages. Votes are still expected today on this legislation. No one will be able to read it all in its entirety. Special interests win. Americans lose,” Rep. Andy Biggs (R-Ariz.), the head of the conservative House Freedom Caucus tweeted.
Progressive firebrand Alexandria Ocasio-Cortez (D-N.Y.) expressed a similar sentiment.
“Congress need to see & read the bills we are expected to vote on.I know it’s “controversial” & I get in trouble for sharing things like this, but the people of this country deserve to know. They deserve better,” she tweeted.
The omnibus largely rejects a spending proposal from Trump which would have enacted significant cuts across federal agencies like the State Department and Environmental Protection Agency and institutions such as the National Institutes for Health, National Science Foundation and National Endowment for the Arts.
“This bill drives the final stake through the heart of the Trump Administration’s effort to substantially diminish the role of government in helping Americans in need and promoting economic growth,” said Senate Appropriations Committee Vice Chairman Patrick Leahy (D-Vt.).
Congress has roundly rejected the spending cuts Trump proposed in each year of his presidency.
Trump is expected to sign the legislation, despite his assertion in 2017 that he would never again sign a massive, last-minute spending package made public briefly before passage.
National