Chuck Yeager, the first man to break the sound barrier, dead at 97 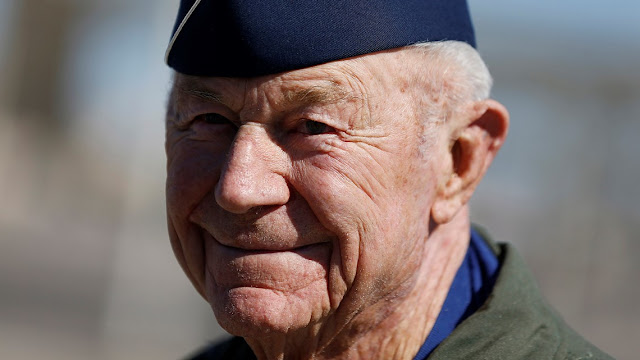 Retired Air Force Brig. Gen. pilot Chuck Yeager, who was the first to break the sound barrier and later inspired "The Right Stuff" book and movie adaptation, died Monday evening at the age of 97. Victoria Yeager announced his passing on Twitter.
"It is w/ profound sorrow, I must tell you that my life love General Chuck Yeager passed just before 9pm ET. An incredible life well lived, America's greatest Pilot, & a legacy of strength, adventure, & patriotism will be remembered forever," the late Yeager's spouse posted using his official Twitter account.
Yeager is known for his achievement of being the first to break the sound barrier in 1947 when he flew the Bell X-1 rocket 700 mph at 43,000 feet, marking an extraordinary accomplishment in aviation.
His achievements were written about in Tom Wolfe's book "The Right Stuff," and later inspired the 1983 film.
NASA Administrator Jim Bridenstine released a statement, calling Yeager's death "a tremendous loss to our nation."
"Gen. Yeager's pioneering and innovative spirit advanced America's abilities in the sky and set our nation's dreams soaring into the jet age and the space age. He said, 'You don't concentrate on risks. You concentrate on results. No risk is too great to prevent the necessary job from getting done,'" Bridenstine said in his statement.
A pilot with over 60 years of aviation experience, Yeager is regarded as one of America's best airmen over his accomplished record-breaking feats.
After serving the nation in World War II, Yeager went on to break his own record. In December 1953, he traveled at Mach 2.44 just days before the 50th anniversary of the Wright brothers' first powered flight, according to NASA.
National