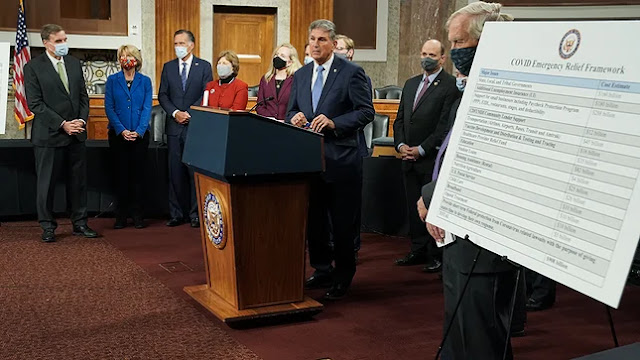 A bipartisan group of lawmakers unveiled a $908 billion coronavirus relief proposal on Tuesday as leadership faces growing pressure to cut a deal.
The measure, rolled out by more than a dozen members from the House and Senate, comes as cases are climbing across the country and Congress is running out of time to clinch a long-stalled fifth relief bill with lawmakers scheduled to leave for the year as soon as next week.
Sen. Joe Manchin (D-W.Va.) said it would be "inexcusable" for Congress to leave town for the year without providing more coronavirus relief with a slew of assistance programs set to expire within weeks.
"This is a COVID emergency relief framework," Manchin said. "It's not the time for political brinkmanship. ... This is going to get us through the most difficult times."
The bill, according to a framework released on Tuesday, would provide another $160 billion for states and cities — a top priority for Democrats — $180 billion for unemployment insurance and $288 billion for more small business assistance through the Paycheck Protection Program.
The unemployment benefits would break down to $300 a week for 18 weeks, retroactive to Dec. 1. That’s half of the $600 per week included under the CARES Act from late March.
It also includes billions in assistance for transportation-related industries like airlines, $16 billion for vaccine development and distribution and more money for things like schools, child care and the Postal Service.
The funds, according to senators, would run through the first quarter of 2021 in an effort to provide states and businesses a bridge to get through what health experts are predicting will be a brutal winter. Though the stock market has hit record highs, the spread of the coronavirus has devastated small businesses and killed more than 268,000 people in the U.S., according to figures compiled by Johns Hopkins University.
“It’s been said, this is not what everybody would wish. People are going to look at these buckets and they’re going to say, 'Well, my bucket isn’t there,' or 'My bucket is only half full.' Well, this is… emergency relief. This is designed to get us through this next quarter,” said Sen. Lisa Murkowski (R-Alaska).
In a hat tip to Senate Majority Leader Mitch McConnell (R-Ky.), the proposal would provide a short-term federal protection from coronavirus-related lawsuits until states could come up with their own protections.
The bill's price tag is about double the $500 billion being pushed for by McConnell and roughly half of the $2.2 trillion viewed by House Speaker Nancy Pelosi (D-Calif.) and Senate Democratic Leader Charles Schumer (N.Y.) as the starting point for negotiations.
The senators in the group have been meeting in-person or virtually every day for weeks, except on Thanksgiving, to try to craft the proposal amid growing frustration about the inability for McConnell, the White House and congressional Democratic leadership to make progress toward a deal.
"It's not gonna make everybody happy but there's been an enormous amount of work done," said Sen. Mark Warner (D-Va.), adding that it would be "stupidity on steroids" to leave for the year without passing more assistance.
For the proposal to go anywhere, it would need to get buy-in from leadership in both parties and both chambers. Pelosi and Treasury Secretary Steven Mnuchin are expected to talk about coronavirus relief on Tuesday for the first time since October.
The group has been in touch with McConnell, Mnuchin and Schumer, though lawmakers stopped well short of pledging buy-in.
“We have communicated with Secretary Mnuchin about our negotiations. He hasn’t weighed in as to whether he agrees or disagrees. He’s offered some advice in terms of figures,” said Sen. Mitt Romney (R-Utah).
Lawmakers acknowledged that their proposal was likely to not please factions on both sides of the aisle, but offered it as a compromise that could break the weeks-long stalemate.
Sen. Susan Collins (R-Maine) added that it was "absolutely essential that we pass emergency relief."
The push by the bipartisan group comes as a growing number of rank-and-file Democrats have said they are open to a bill below Pelosi and Mnuchin’s figure of $2.2 trillion.
McConnell and Schumer traded blame on Tuesday for the lack of progress among leadership toward a deal.
“Let’s hope our Democratic colleague will finally let us make law in all the enormously important areas where we do not even disagree,” McConnell said.
Schumer fired back that the bill being pushed by McConnell was full of “poison pills,” adding that “the Republican leader’s idea of action has been to bring partisan legislation to the floor and then demand everyone accept it.”
Lawmakers are running out of time to get a deal before 2021, with the House scheduled to leave for the year next week. Congress also has to fund the government by Dec. 11, a deadline that lawmakers have floated could be a vehicle for passing some coronavirus relief.
But top GOP senators indicated this week that coronavirus relief is currently not being included in negotiations over the year-end spending omnibus.
“Don’t look good there,” Senate Appropriations Committee Chairman Richard Shelby (R-Ala.) told reporters about the chances of the stimulus.
Sen. Roy Blunt (R-Mo.), a member of GOP leadership and the Appropriations Committee, indicated that COVID-19 and government funding are on separate tracks, for now at least.
“I do think that we’re on the track we’re headed that [it’s] Chairman Shelby’s view that we need to do the omnibus and get it done and then decide are you going to do … some COVID package,” Blunt said.
National