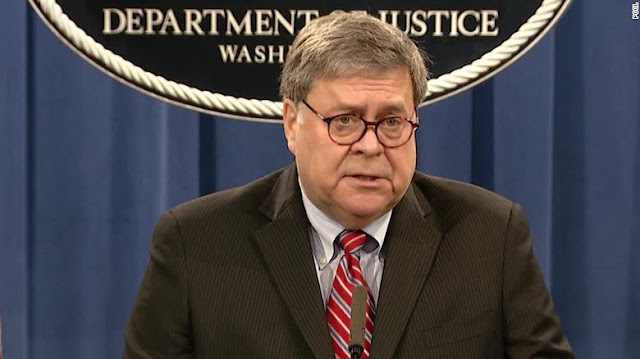 Attorney General William Barr on Monday said he saw no reason to tap a special counsel to investigate Hunter Biden’s finances or claims of election fraud.
Barr, speaking at a Justice Department press conference about new charges in the Lockerbie bombing case, did not comment extensively on the Hunter Biden investigation but said it was being handled “appropriately.”
“I think to the extent that there’s an investigation I think that it’s being handled responsibly and professionally currently within the department,” Barr, who is leaving office this week, told reporters. “To this point, I have not seen a reason to appoint a special counsel and I have no plan to do so before I leave.”
The comments could lead to more friction between Barr and President Trump, who has reportedly discussed pushing for a special counsel to be appointed to take over the investigation into President-elect Joe Biden’s son.
The investigation is currently being run out of the U.S. attorney’s office in Delaware and said to relate to Hunter Biden’s foreign work. Hunter Biden acknowledged the existence of the investigation earlier this month, saying it is focused on his tax affairs.
In another rebuke to Trump, Barr also said he saw no need to tap a special counsel to investigate claims of fraud in the presidential election. Trump is said to have discussed the possibility of naming Sidney Powell, a proponent of election-related conspiracy theories, as a special counsel to investigate claims of fraud. Barr also said there was “no basis” for a federal seizure of voting machines, an idea that has been floated by Trump’s personal attorney Rudy Giuliani, according to The New York Times.
"If I thought a special counsel at this stage was the right tool and was appropriate I would name one, but I haven’t and I’m not going to,” Barr told reporters.
The news conference is likely Barr’s last before he steps down from his position at the Justice Department. Barr is slated to leave his post on Wednesday, roughly a month before President-elect Biden will take office.
Trump announced last week that Barr would depart his position early. While Trump maintained that the two had a “very good” relationship, the president had grown angry with Barr after he contradicted Trump’s claims about election fraud.
Barr told The Associated Press in an interview earlier this month that the Justice Department had not found evidence of widespread fraud that would change the outcome of the election.
“I stand by that statement,” Barr told reporters on Monday, referring to the comments he made in the interview.
National