Barack Obama vs The Squad 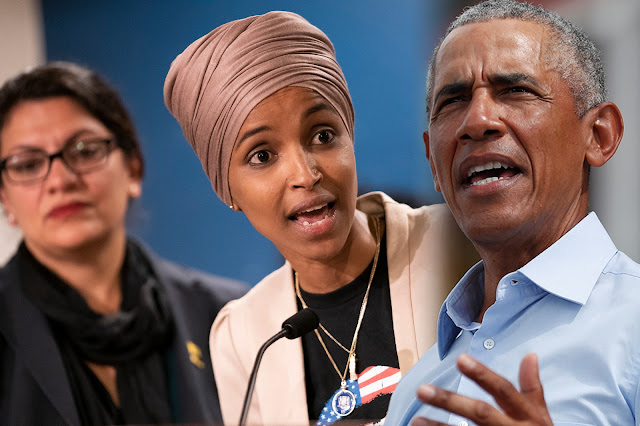 The most amusing thing about the Obama v. the Squad kerfuffle is that there is not actually an inch of substantive daylight between the supposed combatants. Former President Obama does not disagree with the sentiments or objectives of Ilhan Omar et al. He disagrees with their tactic of pursuing it through a slogan – “Defund the Police” – that frightens and enrages most people in the country.
And he disagrees with it not because he thinks most people in the country are right, but because if you wake those people up – as you do when you say stupid s**t like “Defund the Police” – they become an obstacle.
Obama got the Squad’s hackles up by stating:
If you believe, as I do, that we should be able to reform the criminal justice system so that it’s not biased, and treats everybody fairly, I guess you can use a snappy slogan like “Defund the Police,” but you know you’ve lost a big audience the minute you say it. Which makes it a lot less likely that you’re actually going to get the changes you want done.
This is the classic Alinskyite critique of undisciplined radicals who set back The Cause by using unhinged language in the service of what Saul Alinksy himself described as “pointless, sure-loser confrontations.” As he elaborated in Rules for Radicals, to bring about the change the Left seeks requires the hard work of appealing to the people you want to bring around by coopting their language, appealing to their experience, and exhibiting respect rather than contempt for their values – even if you are actually contemptuous of them. “A mess of rhetorical garbage about ‘Burn the system down’” is only going to drive people to the political right.
Obama’s success has been to understand this – to absorb the lesson Van Jones succinctly states as: “I am willing to forgo the cheap satisfaction of the radical pose for the deep satisfaction of radical ends.” Like the Squad, Obama wants radical law-enforcement reform. But he knows “Defund the Police” turns people off. The Squad members may be heroes in their fishbowls, but they will never be broadly viable that way.
By contrast, the former president speaks soothingly about “reforming the criminal justice system,” making it “fair,” ensuring that “it’s not biased” – the language that appeals to ordinary people who like the police but are sensitive to the explosive charge of racism, who want to be perceived as decent and reasonable even if they know the claim that police are hunting down black men is a poisonous slander. The enervating display of empathy makes Obama politically viable. He was able to acquire power, whereupon he used the Justice Department to overhaul policing through civil rights lawsuits and consent decrees.
That’s how Change! is achieved. Of course, the Ilhan Omars of the world are what makes Obama seem reasonable to people … so how much he really wants them to change is an open question.
Opinion