Atlantic City auctions off chance to blow up Trump Plaza 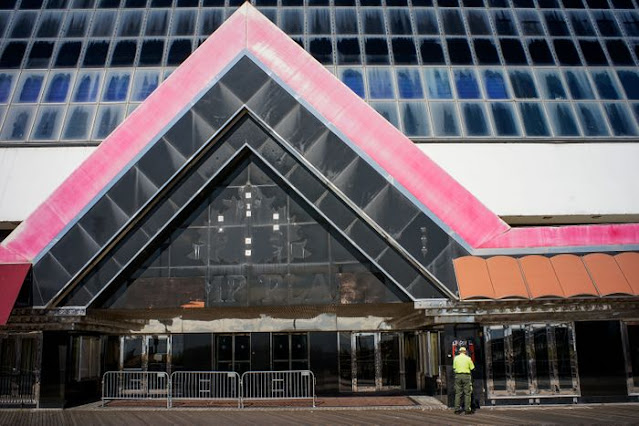 Atlantic City has launched an auction in which the winner will get to virtually push the button that starts the long-anticipated implosion of the former Trump Plaza Hotel & Casino building.
The demolition, scheduled for Jan. 29, comes after the casino at the New Jersey gambling hub shuttered in 2014 after operating for 30 years. The Associated Press reported that the structure has since fallen into a state of disrepair, with pieces of the structure falling off and landing on the Atlantic City boardwalk.
Now, Bodnar’s Auction Sales has been contracted to solicit bids from Thursday through Jan. 19, when the top offers will be revealed and a live auction will determine a winner.
The auction is meant to benefit the Boys & Girls Club of Atlantic City, with Mayor Marty Small (D) hoping the fundraiser will bring in excess of $1 million.
“Some of Atlantic City’s iconic moments happened there, but on his way out, Donald Trump openly mocked Atlantic City, saying he made a lot of money and then got out,” Small told the AP. “I wanted to use the demolition of this place to raise money for charity.”
The auction’s web page says the city’s Boys & Girls Club has "stood at the forefront of the city’s future for nearly 50 years,” and donations from the fundraiser “will help to sustain programs that serve over 2,500 youth in Atlantic City,” including arts and education programs, as well as food distribution during the coronavirus pandemic.
As of early Thursday afternoon, bids stood at $7,250 on the auction website with 10 bids received so far.
The Trump Plaza was one of four casinos in Atlantic City forced to close in 2014, followed by another former Trump casino, the Taj Mahal, in 2016, which has since reopened as the Hard Rock casino.
According to the AP, Trump ended most of his financial ties with Atlantic City in 2009 aside from a 10 percent fee for the use of his name at three casinos. That stake ended when billionaire Carl Icahn took on the company out of bankruptcy court in February 2016.
Small said this week that he plans on discussing potential uses for the land with Icahn following the demolition, including a possible new attraction for families to enjoy.
“Not often does inner-city oceanfront land open up,” the mayor said. “We have one chance to get this right.”
National