Analysis: Some Texas officials would love to redirect your attention 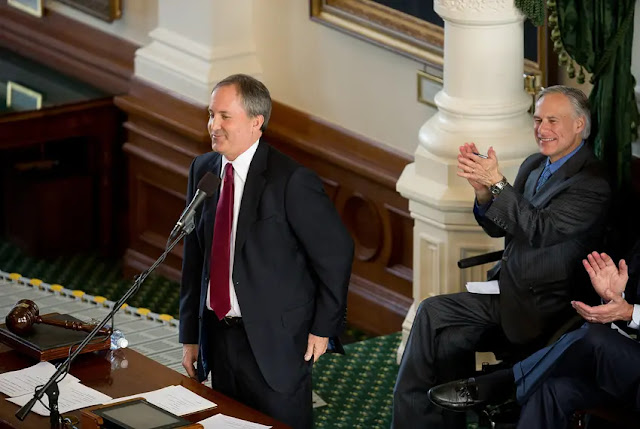 By Ross Ramsey
A surprising number of political reputations would collapse without the benefit of our short attention spans and vulnerability to distraction.
President Donald Trump has shaped his understanding of our traits into performance art. He’s a master of changing subjects, replacing the crisis of the moment with something that yanks attention away and benefiting from our collective tendency to forget about what happened a year ago, or a week ago, or yesterday.
He didn’t invent this; he’s just phenomenally good at it. And ambitious politicians lower on the food chain have been taking notes — which brings us to the Texas governor’s 2019 inauguration, and the current legal tornado hitting the Texas attorney general’s office.
Texas news outlets were all over the price of Gov. Greg Abbott’s 2019 inauguration. It was expensive. It was a public event put on by a public official. The money was mostly private, if you don’t count the use of the Texas Capitol, the protection and crowd control handled by state police and stuff like that. And — this was catnip for reporters — Abbott’s government and campaign aides wouldn’t specify how they spent the $5.3 million raised for the festivities.
There was one more public expense: $116,000 in state money used to defend their decision to keep their transactions secret.
We know this because of the ongoing reporting from The Texas Tribune’s Shannon Najmabadi and the Houston Chronicle’s Jay Root, and a lawsuit filed under the Texas Public Information Act by The Texas Tribune. The governor’s organization was apparently counting on short attention spans to hide the spending. Questions about things like this often die down, receding into obscurity.
Because of that lawsuit, we now know the inaugural committee spent $1.7 million for an appearance by George Strait and $271,000 on barbecue. Former Gov. Rick Perry spent about that much on his entire 2011 inauguration. But Abbott’s committee gave $800,000 to charity, $930,000 on payroll and $931,000 on fundraising expenses — including $908,000 in commissions for the fundraisers. Who got what is detailed in the story the reporters got after the state settled the lawsuit and opened the bank records of the inaugural committee.
Score one for long attention spans — and for the incentive for transparency a solid lawsuit can inspire. The hide-and-wait strategy didn’t work out for the ruling class this time.
Abbott’s defender in all of that was his successor in the Office of the Attorney General, Ken Paxton. In his own legal affairs, Paxton has masterfully employed distraction over the last couple of weeks, first by suing four other states for their election procedures and now by leading a swarm of state attorneys general who are suing Google for allegedly anti-competitive practices.
But for those two high-stakes national stories, Paxton would be home in Texas batting away news coverage of the workings of his own office. Earlier this year, eight top officials of Paxton’s office told the agency and law enforcement officials that the attorney general’s help for a campaign donor had crossed into bribery and abuse of his public office. All eight have left the agency; several of them have sued the state for what they contend is retaliation for blowing the whistle on their boss. The Associated Press has reported that the FBI is investigating the allegations.
You can see why Paxton might want to change the subject.
It’s not his first rodeo; in fact, his first rodeo isn’t over. Paxton was indicted on securities fraud charges during his first year in office, and that case — after years of legal bickering — still has not gone to trial.
These are the sorts of legal tricks that used to inspire lawsuit reformers. Forum shopping. Endless legal delays that increase the cost of litigation.
Yet they persist. It’s because they work. Most Texans haven’t thought about the Abbott inauguration since the Abbott inauguration — if they were even paying attention then. And who has had Paxton’s troubles on their mind lately? Seems like there was something about voting in Georgia and Pennsylvania, and something about Big Tech.
There are so many things out there, demanding attention. If you don’t choose which news to follow, someone else would love to do it for you.
This article originally appeared at the Texas Tribune.
Opinion