4 stabbed, 23 arrested in clashes between pro-Trump supporters, counter-protesters in Washington 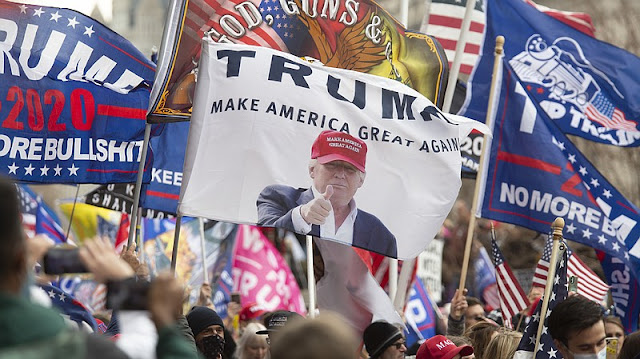 Four people were stabbed Saturday night during clashes between supporters of President Trump and counter-protesters in Washington, D.C., CNN reported, citing local police.
The four victims are reportedly in critical condition.
A total of eight people were transported to local hospitals, according to the network, including two police officers. The officers’ injuries are said to be non-life-threatening. Two other people were also treated for minor injuries, officials said.
Almost two dozen people were arrested during the “Stop the Steal” protests, the network added, for charges including assault on police officers, simple assault, riotous acts, crossing a police line and possessing a Taser.
The Washington Post reported that the crowd, which was smaller than one for a similar gathering after last month's election, heard from speakers railing against the Supreme Court, Fox News and President-elect Joe Biden.
The Post noted that the four stabbings occurred near a bar that served as a rallying point for members of the Proud Boys, a far right-wing group.
Faceoffs with counterprotesters occurred at that bar as well as at Black Lives Matter Plaza, Franklin Square, and other spots in the city, according to the newspaper.
The demonstrations came one day after the Supreme Court rejected a widely panned bid by Texas to overturn Biden’s win.
In a brief, unsigned order on Friday, the justices delivered a devastating blow to the long-shot legal campaign waged by Trump and his allies since his electoral defeat.
The ruling was a repudiation to Trump, as well as the 18 GOP state attorneys general and 126 House Republicans who sought to nullify Biden’s wins in Wisconsin, Michigan, Georgia and Pennsylvania — key battleground states that he won.
The court said that Texas lacked the legal right to litigate over how other states conduct their elections.
Trump has refused to concede the election, and his legal team has been unsuccessful in multiple efforts to overturn the vote.
The Electoral College is expected to formally elect Biden as the next president on Monday.
National