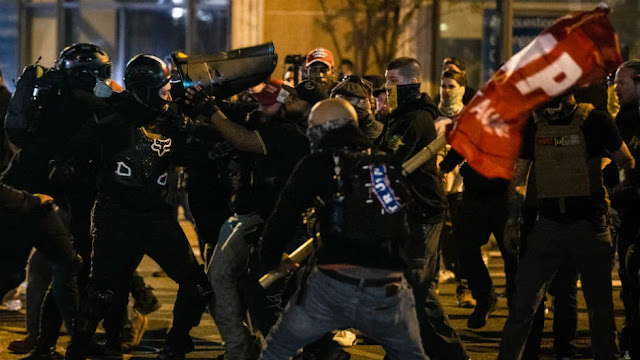 Supporters of President Trump and counter-demonstrators clashed Saturday night after what was mostly a peaceful day of demonstrations in support of Trump and protesting the election results.
Violent clashes between Trump supporters and counter-protestors that were caught on tape by The Washington Post showed members from both sides lunging at one another. Objects can be seen in the footage being thrown in the air, and people are punching one another.
Video caught by NBC4 reporter Shomari Stone shows several encounters between the two sides, including a Trump supporter getting pushed after he bumped up against a group of counter-protesters while holding a flag.
Another clip in Stone's video shows demonstrators arguing while a police officer stands between them.
Separate footage from Stone shows counter-demonstrators clashing with the president's supporters outside the White House when someone set off fireworks. The same video shows officers in masks pushing back a crowd trying to confront Trump supporters.
A group of people also gathered near Freedom Plaza chanting "U-S-A," according to footage from WUSA 9 reporter Kolbie Satterfield. A report from the media outlet noted that flash bangs as well as fireworks went off in the area as well.
Amid the tumult, Washington, D.C. police made 20 arrests on Saturday, and two officers were injured, according to Satterfield.
Trump on Saturday night weighed in on the situation, accusing D.C. Mayor Muriel Bowser (D) of not doing her job.
"Radical Left ANTIFA SCUM was easily rebuffed today by the big D.C. MAGA Rally crowd, only to return at night, after 99% of the crowd had left, to assault elderly people and families," he tweeted.
"Police got there, but late. Mayor is not doing her job!"
The violence erupted after what had proven to be a mostly peaceful day of demonstrations in D.C.
A flood of Trump supporters made their way into the nation’s capital to take part in what was billed under many names including the Million MAGA March and Stop the Steal DC, and started off at the Freedom Plaza around noon.
Women for America First, a group led by former Tea Party activist Amy Kremer organized the event at Freedom Plaza, where a mix of right-wing groups including the Proud Boys as well as a smattering of the president’s supporters gathered.
Most demonstrators carried signs or wore shirts alleging that there was widespread voter fraud that negatively impacted the results for Trump.
Speakers at the event like Infowars host Alex Jones encouraged the crowd not to give up hope on the election results.
"It will be weeks, maybe months, but we will stick with this president, Donald J. Trump," Jones said.
The event came one week after President-elect Joe Biden was projected to win the 2020 election. The former vice president was also projected to win the states of Arizona and Georgia, two states that had not gone red during presidential elections since the 1990s.
The president however has refused to concede the election, with his campaign mounting legal battles in multiple swing states throughout the country. Trump and his campaign have repeatedly alleged that the election was subject to widespread voter fraud, and have made claims that Democrats have tried to steal the election.
Despite Trump’s claims about voter fraud, there is no substantial evidence to suggest that the election was subject to irregularities.
A coalition of state and federal election officials on Thursday released a statement saying that there was “no evidence” that any voting system was compromised or votes lost during the recent general election. They added that this was the most secure election in American history.
Saturday morning, the president drove by a crowd of protesters waving from the car window as the crowd cheered him on. Later in the day, the president offered encouragement to supporters by retweeting a scene of the protest and writing, “We will win!”
National