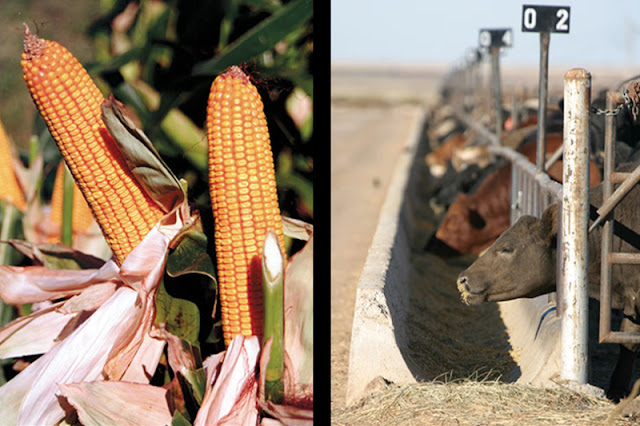 By Jennifer Dorsett
U.S. beef and pork exports and American corn farms mutually benefit from one another, according to numerous studies conducted by the U.S. Meat Export Federation (USMEF).
The latest study, conducted by the organization in 2019, shows corn farmers are gaining more value than ever from red meat exports, USMEF Vice President of Industry Relations John Hinners said.
During a recent webinar hosted by the Texas Corn Producers, Hinners and agricultural researcher and analyst Dave Juday discussed how meat exports add value for corn farmers, the current state of global trade and the mutually beneficial relationship between the two agricultural sectors.
“We have a premium product when it comes to U.S. beef. It’s corn-fed, which produces some of the best marbling in the world, and we pair that with some of the best genetics in the world,” Hinners said. “Corn-fed and corn feeding is one of the key marketing attributes we have above and beyond the rest of the world.”
USMEF is made up of a diverse group of members, including industry sector representatives like livestock raisers, packers and processors, along with grain farmers and oilseed producers, Hinners noted.
“We’re really an international marketing organization. We have nine sectors around our table, and we work to make sure each group is represented equally,” he said. “We’re able to leverage your checkoff dollars to move corn and meat through the export chain. It’s so helpful to have those checkoff dollars, because it takes money to advertise and market your programs and products.”
Hinners noted about 95 percent of all short plate primal cuts, which is not a highly desirable cut in the U.S., are exported to other countries and bring much higher prices than they would in domestic markets.
“The majority of the short plate is exported. Our key markets are Korea and Japan, where beef short ribs get sliced and diced and used in beef bowls,” he said. “Sliced short plate has so much flavor because of corn feeding. It’s the much-needed ingredient to providing highly-marbled, great-tasting beef, so we get a premium on that product over our competitors.”
The COVID-19 pandemic brought unprecedented challenges and drastic market contractions across the globe. USMEF redirected some marketing resources to help foodservice establishments pivot to promote U.S. beef and pork for takeout and at-home dining experiences, like meal kits.
Juday discussed the study examining the relationship between red meat exports and corn. He said the rate of growth in corn use in recent years has been highest in terms of red meat exports, increasing by 28 percent from 2015-2019.
“Since 2015, indirect exports of corn through beef and pork exports represent the fastest-growing category of corn use. Over that period of time, one in every four bushels of added feed demand for corn was due to beef and pork exports,” he said. “Commodities are priced on the marginal demand—what someone is willing to bid on that last bushel of corn or steer sets the price in the market. That’s where meat exports can help drive corn prices.”
Last year, red meat exports used about 480 million bushels of corn that generated $1.8 billion in revenue for the U.S. corn industry, according to Juday.
“What that translates to is that corn would’ve been 46 cents a bushel cheaper last year without the beef and pork export market,” he said. “Additionally, a lot of distillers grains that come from ethanol mills are used in feed. That generates another $411 million in revenue for ethanol mills, which represents about 4 cents per gallon in gross operation margins for ethanol mills. That’s not just a win-win. It’s a three-way win-win-win situation for everyone involved.”
In Texas, nearly $38 million in cash market value to corn growers came from red meat exports, he said. Breaking it down by state, Juday noted about 75,000 acres of Texas corn went into producing beef and pork that was exported to other markets.
Although 2020 has been challenging, Hinners expects the market to steadily rebound, and he hopes to see a return to the record red meat export levels of 2018.
It’s all possible because of the valuable relationship between corn farmers and ranchers, he said.
“We don’t want to sell our products on price. We know we have a premium product, and we talk about the stackable assets we have. We talk about the safety of our product, our land grant universities that research crop and animal science,” Hinners said. “We talk about the family farmers growing our corn and raising our beef. Putting a face on the market really helps solidify those sales.”
National