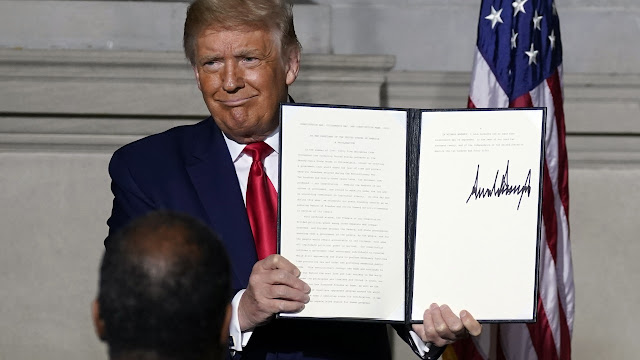 On the eve of Election Day, President Trump signed a new executive order with potentially big implications for American education.
The order established the president’s newfound “Advisory 1776 Commission,” an educational committee with the goal to “better enable a rising generation to understand the history and principles of the founding of the United States in 1776.”
Emphasizing the pillars of American government, including the rights to life, liberty, and the pursuit of happiness, the advisory committee will work within the U.S. Department of Education to develop core principles of the American founding for schools to adopt.
Composed of 20 members appointed by the president, each member will have a designated term of two years on the council.
Within a year of creation, the Advisory will produce a report for the president to review what is being called a “patriotic education.”
The order explains that recent civil rights protests, largely sparked by the police killings of Black Americans like George Floyd and Breonna Taylor, are a catalyzing force in the formation of the 1776 Commission.
These deaths prompted protests highlighting the U.S.’s history of systemic racism that permeates society in forms like police brutality and a persistent economic divide, calling racial equality in the U.S. into question.
The order also comes after the president criticized the 1619 Project, produced by The New York Times Magazine, which details the country’s history starting the year the first African slaves were brought to an English colony. Other Republican lawmakers also criticized the initiative, with Sen. Tom Cotton introducing a bill to withhold federal funding for schools that teach the 1619 Project.
Amid a renewed civil rights dialogue, public pressure grew for historical statues with ties to slavery and racial oppression, such as Confederate monuments and Christopher Columbus statues, to be torn down –– a movement Trump vehemently opposed despite public sentiment shifting in the opposite direction.
Calling the accounts of the U.S.’s history of race relations “one-sided and divisive,” the executive order says the Commission will be central to prompting a curriculum that instead focuses on the U.S.’s “experience of overcoming great national challenges,” and how the U.S. was “successful” in eradicating slavery from society.
“In recent years, a series of polemics grounded in poor scholarship has vilified our Founders and our founding. Despite the virtues and accomplishments of this Nation, many students are now taught in school to hate their own country, and to believe that the men and women who built it were not heroes, but rather villains,” the order reads. “This radicalized view of American history lacks perspective, obscures virtues, twists motives, ignores or distorts facts, and magnifies flaws, resulting in the truth being concealed and history disfigured. Failing to identify, challenge, and correct this distorted perspective could fray and ultimately erase the bonds that knit our country and culture together.”
Notably, the executive order states: “Parents and local school boards must be empowered to achieve greater choice and variety in curriculum at the State and local levels.”
“Viewing America as an irredeemably and systemically racist country cannot account for the extraordinary role of the great heroes of the American movement against slavery and for civil rights,” the order states. “Thus it is necessary to provide America’s young people access to what is genuinely inspiring and unifying in our history, as well as to the lessons imparted by the American experience of overcoming great national challenges. This is what makes possible the informed and honest patriotism that is essential for a successful republic.
National