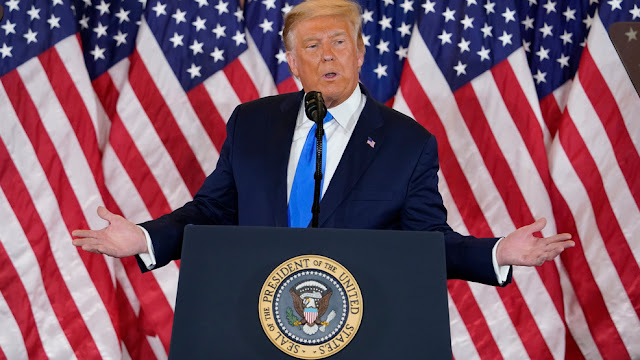 President Trump's reelection campaign on Wednesday said it was filing a lawsuit to halt the counting of votes in Michigan until it is given access to observe the tabulation process.
Campaign manager Bill Stepien alleged that it had not been given "meaningful access" to observe the opening of ballots at multiple locations.
"We have filed suit today in the Michigan Court of Claims to halt counting until meaningful access has been granted," Stepien said in a statement. "We also demand to review those ballots which were opened and counted while we did not have meaningful access. President Trump is committed to ensuring that all legal votes are counted in Michigan and everywhere else."
The suit was filed after Democratic presidential nominee Joe Biden pulled ahead of Trump in Michigan after largely urban and suburban counties reported mail ballot totals overnight.
Trump tweeted misleading or inaccurate claims about ongoing vote counts in Michigan, Wisconsin and Pennsylvania from Wednesday morning into the early afternoon. The tweets, in which Trump sowed doubt about the legitimacy of counting legal votes beyond Election Day, were flagged by Twitter as containing misleading information.
"They are working hard to make up 500,000 vote advantage in Pennsylvania disappear — ASAP. Likewise, Michigan and others!" Trump tweeted.
Trump held an early lead in Michigan on election night, but experts had cautioned the race may tilt toward Biden as mail and absentee ballots were counted. State laws prevented Michigan officials from processing those ballots prior to Election Day, delaying the tabulation process.
Biden overtook Trump in Michigan on Wednesday morning as Detroit and suburban areas began reporting their totals. The former vice president led by roughly 50,000 votes in the state as of Wednesday afternoon. Trump carried the state by less than 11,000 votes in 2016.
The Trump campaign has maintained it still has a path to victory in Michigan, but it has also conceded that its best path to 270 electoral votes will come via wins elsewhere.
The lawsuit in Michigan is likely a preview of a flurry of legal actions to come as Trump's path to reelection narrows. The president's campaign has already requested a recount in Wisconsin, where Trump is trailing by about 20,000 votes, and officials signaled they may challenge results in Nevada.
"We are obviously leading a full court press to make sure that we have all of our legal teams that are in place," senior Trump campaign adviser Jason Miller said Wednesday morning. "We want to make sure that all legally cast ballots are counted. We also want to make sure that illegally cast ballots are not counted."
The Nevada Supreme Court on Tuesday denied an emergency request from the Trump campaign to impose more restrictive vote-counting procedures in Democratic-leaning Clark County, one day after a lower court rejected a request by the campaign and state Republicans to allow greater opportunity to observe the vote-counting process.
National