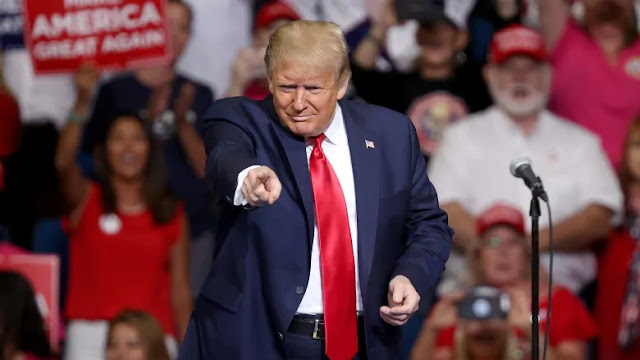 President Trump on Tuesday called into “Fox & Friends” expressing optimism on Election Day about his chances of winning another term and boasting about the size of his rally crowds.
Trump said his campaign was feeling confident about winning Texas, Florida and Arizona “very big” and predicted he would do well in North Carolina and Pennsylvania. All five states are ones that helped propel Trump to victory in 2016.
“We’re feeling very good. We have crowds like nobody has ever had before,” Trump told the hosts. “I think that translates into a lot of votes, and we’re going to see very soon.”
Asked how many electoral votes he would win, Trump said he anticipates topping 306 — the number that he received in his first run for the White House four years ago.
Trump’s confident remarks come as polls continue to show him with a narrow path to victory, trailing Democratic nominee Joe Biden nationally and in key swing states.
Democrats have an edge over Republicans going into Tuesday after weeks of early voting, and Republicans have expressed concerns particularly about Trump’s chances of winning Arizona, where Democrats for the first time outpaced Republicans in the early vote. Nearly 100 million ballots were cast before Election Day, an unprecedented early turnout.
The latest polls indicate that Biden holds leads in Michigan, Pennsylvania and Wisconsin, while the race remains tight in states like Florida and North Carolina and even historically red states like Texas, Arizona and Georgia. Biden told reporters he was feeling “good” in brief remarks Tuesday morning before heading to some final campaign stops in Pennsylvania.
Still, Trump was adamant Tuesday morning that his campaign rallies indicate robust support that would propel him to victory. Trump staged 10 rallies in the past two days with massive crowds despite the coronavirus pandemic, crisscrossing the country to battleground states.
Trump said on Fox that he would only declare victory “when there is victory,” following an Axios report earlier this week that he planned to prematurely declare himself the winner of the election if he appears ahead on Tuesday.
“Only when there is victory. There is no reason to play games,” Trump said. “I think we have a very solid chance of winning, and I think a lot of that has to do with the tremendous crowd size.”
During the roughly 30-minute interview, to which Trump called in 45 minutes late, the president continued to insist the United States is “rounding the corner” on the coronavirus pandemic, despite surging cases across the country.
“I say rounding the corner. Some people don't like that phrase, but I use that phrase," Trump said, speaking optimistically about the prospect of a coronavirus vaccine.
His remarks on the virus stood in stark contrast to a private warning issued by White House coronavirus task force coordinator Deborah Birx reported by The Washington Post on Monday.
"We are entering the most concerning and most deadly phase of this pandemic ... leading to increasing mortality," Birx wrote in an internal report Monday, according to the Post. "This is not about lockdowns — It hasn't been about lockdowns since March or April. It's about an aggressive balanced approach that is not being implemented."
The coronavirus has been a defining issue of the presidential race. Biden has hammered Trump repeatedly on his response to the virus while insisting he would implement a plan to control its spread and listen to scientists.
Trump has regularly eschewed public health guidelines in holding his packed campaign rallies, publicly sparred with his own health advisers and criticized Democratic governors for what he describes as too-stringent restrictions meant to slow the spread of the virus, which has now killed nearly a quarter-million Americans.
Trump insisted Tuesday that he would return the U.S. economy, which has been ravaged by the pandemic and its related business closures, to full strength and repeatedly blamed China for the coronavirus.
At one point, Trump, who often calls into "Fox & Friends," took aim at Fox News, suggesting the conservative network’s coverage has been unfair because it has been airing speeches by Biden and former President Obama.
“We’re trying to show both sides,” countered host Brian Kilmeade. “I don’t think it’s an endorsement of anybody.”
“in the old days, they wouldn’t put sleepy Joe Biden on every time he opened his mouth. They had other networks for that, frankly,” Trump replied.  “It’s a much different operation, I’m just telling you.”
Trump also aired grievances about other top Democrats, including House Speaker Nancy Pelosi (D-Calif.) and House Intelligence Committee Chairman Adam Schiff (D-Calif.), both of whom played pivotal roles in his impeachment by the House of Representatives last year.
And Trump complained about the Supreme Court ruling allowing Pennsylvania, a key battleground, to accept mail ballots mailed by Election Day that are received up to three days later, calling it unfair. He insisted on knowing the election results on Tuesday evening or early Wednesday morning.
“This decision on Pennsylvania was a horrible decision. There is just no reason to go beyond a date,” Trump said. “It actually delays the election.”
National