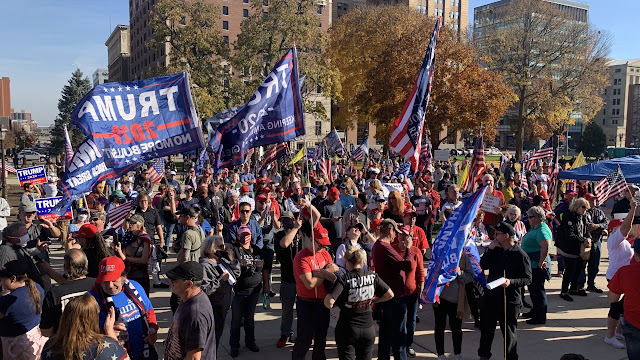 Thousands of Trump supporters rallied around the nation’s capital Saturday to contest the election results and back the president's allegations that the election was invalid due to widespread voter fraud.
The demonstration on Saturday came just one week after media outlets projected President-elect Joe Biden as the winner of the 2020 election.
The event, which was billed under many names including the Million MAGA March and Stop the Steal DC, started off in earnest at Freedom Plaza near the White House before noon.
President Trump himself drove by the group in his motorcade shortly after 10 a.m. on his way to play golf.
Women for America First, a group led by former tea party activist Amy Kremer, organized the event in Freedom Plaza and received a permit to have 10,000 people in the area.
While the number of protesters did not appear to reach that total capacity, some of the president’s supporters and staff celebrated the turnout as a success.
“More than one MILLION marchers for President @realDonaldTrump descend on the swamp in support,” White House Press Secretary Kayleigh McEnany tweeted.
A mix of Trump supporters and right-wing groups dotted the crowd at Freedom Plaza, including scattered QAnon backers, some sporting paraphernalia of the right-wing militia group the Three Percenters and dozens of members of the Proud Boys.
Many of the latter group, a self-described “Western chauvinist” organization, wore shirts with the phrase “Stand Back, Stand By,” a reference to Trump’s message to them at a September presidential debate.
The vast majority of protesters gathered in the plaza did so without masks a day after the United States had a record 184,000 confirmed cases of COVID-19.
Most carried signs or wore shirts alleging widespread fraud in the election, despite no evidence irregularities took place. Democrats, the Chinese Communist Party, Bill Gates and Fox News were also the targets of chants and posters.
Biden is currently projected to win the Electoral College with 306 votes to Trump's 232, according to an election map from The New York Times.
Many of the rally’s speakers urged Trump’s supporters not to give up hope, insisting that evidence of fraud would come to light eventually.
"It will be weeks, maybe months, but we will stick with this president, Donald J. Trump," Infowars’ host Alex Jones told the crowd.
A coalition of state and federal election officials as well as top voting equipment manufacturers said that the 2020 election was the most secure in the nation's history. They added that there was "no evidence" that any voting system deleted or lost votes.
After reciting the pledge of allegiance and singing the national anthem as a crowd, a significant portion of the protesters marched to the Supreme Court.
There, many conservative figures including Kremer, former White House aide Sebastian Gorka and MyPillow CEO Mike Lindell gave speeches to a crowd of a couple hundred.
Kremer spent the majority of her speech criticizing tech companies – Facebook, Eventbrite and Mailchimp – for allegedly shutting down her events.
“As much as Big Tech has tried to stop us, I think we showed them today,” she said.
Lindell drew big applause from the crowd for claiming that the only reason Trump lost Minnesota was because Rep. Ilhan Omar (D-Minn.) “runs the state.” Biden won the state by over 200,000 votes.
Also at the Supreme Court were a group of a couple dozen counter-protesters, almost all dressed in black and almost all wearing masks.
A metal barrier and a line of police divided the two groups, but that didn’t stop them from jawing at each other. The Trump supporters broke out into chants of “antifa” several times, while the demonstrators emphasized that the election is over.
Some small confrontations escalated, but not very far. Most confrontations were purely verbal.
A spokesperson for the Metropolitan Police Department told The Hill that 10 people were arrested Saturday “related to the demonstrations,” noting that that number could still rise.
The demonstrations seemed to peter out in the late afternoon, as Trump supporters dispersed from both Freedom Plaza and the Supreme Court.
Following his drive through the crowd of demonstrators on Saturday, the president took to Twitter to rail against the election results, encouraging supporters not to give up hope.
"We will win!" the president said.
National