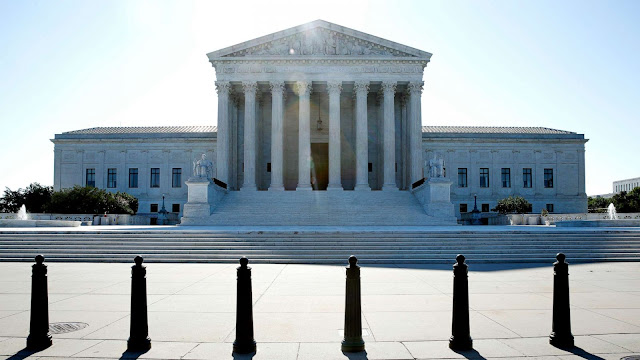 More evidence that the Supreme Court has set itself up for some very contentious post-election rulings, at least if the race turns out to be close.
A federal judge in Houston has turned down a request by a conservative activist and three individuals (the latter are Republican candidates) to invalidate a drive-through voting procedure under which an estimated 127,000 ballots have already been submitted in Harris County, a Democratic Party stronghold. Judge Andrew Hanen is skeptical, however, about the legality of the procedure and has urged voters not to use it anymore. He also granted the plaintiffs’ request to preserve all records indicating which ballots were cast by the procedure in the event there is further litigation, including appeals, challenging the ballots.
In this, Judge Hanen is plainly taking guidance from Justice Samuel Alito.
In last week’s Supreme Court non-decision in the Pennsylvania election-law case, Justice Alito, in an opinion joined by Justices Clarence Thomas and Neil Gorsuch, opined that a state supreme court’s order changing the voting procedures enacted by the state legislature were almost certainly invalid. While Alito argued that it would have been preferable for the Court to resolve the case before Election Day, he “reluctantly” agreed that it was too late for the Court to act on an expedited basis. Nevertheless, Alito observed that this need not allow the state court’s likely illegal action to escape the high court’s review. Rather, at his urging, the parties agreed to segregate that ballots cast outside the legislature’s procedure. That way, if the election is close and the ballots submitted under the state court’s questionable procedures (i.e., three days late) may make a difference, the Supreme Court can decide post-election whether those votes should count.
In the Texas case, the plaintiffs argue that there is no provision in state election law for drive-through voting. Yet, a bureaucracy — the Texas Secretary of State Elections Division — announced two months ago that the state government would permit the drive-through procedure.
In significant respects, the Texas case differs from the Pennsylvania case. To begin with, despite media suggestions to the contrary, there is not an organized Republican effort in Texas. In Pennsylvania, the case is being pursued by the state Republican Party. In Houston, neither the party nor the Trump campaign is a party.
Second, the Texas case does not entail a judicial rewrite of a governing statute enacted by a state legislature — and remember that, under the Constitution, it is state legislatures, not courts or other state officials, which are vested with the responsibility of setting voting rules. In Texas, the decision was made by the state agency that administers election law. While such a bureaucracy is not permitted to countermand the legislature’s laws, it obviously has some discretion in how those laws are carried out.
All that said, the drive-through procedure arguably does countermand the legislature’s prescription of the permissible ways of submitting ballots. The latter do not include the drive-through process. Hence, the skepticism of Judge Hanen, a Bush-43 appointee. His suggestion that voters not use the procedure is driven by the fear that a court will eventually rule that it was not within the power of the state elections division to fashion it.
The case presents several knotty policy considerations. In defending the procedure, the Harris County Clerk argues that, under the Supreme Court’s “Purcell doctrine,” courts must not interfere in an election at the eleventh hour. That is true, but it is also a claim often posited disingenuously to defend actions that have lawlessly changed the election rules late in the game — i.e., actions that themselves violate the Purcell doctrine, as the state elections division’s drive-through procedure arguably does. As the Supreme Court has observed in other cases, when a state legislature’s election rules have improperly been changed late in the game, courts must intervene to correct the error, even if this correction causes disruption because it unavoidably comes late in the game.
There is also the doctrine of detrimental reliance. While the election division’s action may have been infirm, it is usually reasonable for the public to presume that the government’s action is lawful. Therefore, it would arguably be unfair to invalidate ballots that voters had reason to believe they were legitimately submitting. But of course, carrying detrimental reliance too far would swallow the constitutional mandate that election rules be set by state legislatures: All a lawless bureaucrat or court would have to do is rewrite the rule as it saw fit, then claim that nothing could be done about it since voters had relied on the rewrite.
All of this underscores that the Supreme Court should have intervened weeks ago. A firm statement by the justices that the state legislature’s rules control, and that courts and bureaucrats are not at liberty to rewrite them (including a reminder that it is for elected officials, not the unaccountable courts, to decide how to balance the exigencies of a pandemic against the imperative of election integrity), would have clarified voting procedures before potentially millions of voters submitted ballots under illegitimate rules.
As I observed last week, by not ruling pre-election, the Roberts Court has increased the likelihood that it will have to make rulings post-election. That would enable demagogues to say the justices, rather than the public, is choosing the winner of the election. This would be couched as an attack on the Court’s legitimacy, which Democrats would use to bolster their calls for packing the tribunal with progressive ideologues to produce outcomes preferred by the political left.
The justices have courted chaos, and if the election is close, chaos is what we are apt to have.
Opinion