State Department bans funds for groups it says are anti-Semitic 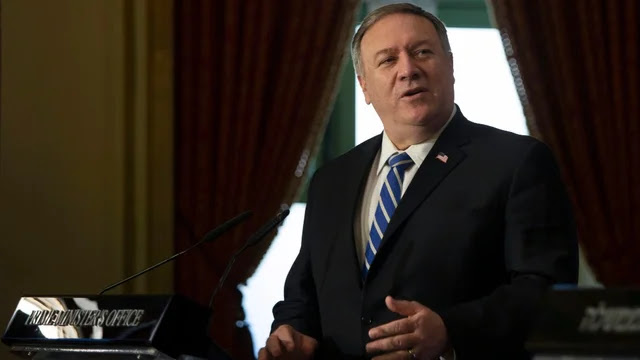 Secretary of State Mike Pompeo on Thursday announced that the State Department will ban funding for any organization it determines participates in the global boycott, divestment and sanctions (BDS) movement against Israel, labeling such activity as anti-Semitic.
The announcement was expected for several weeks and had earlier drawn pushback from civil and human rights groups that warned the effort politicized the fight against anti-Semitism and could delegitimize the work human rights organizations conduct around the world.
The secretary made the announcement alongside Israeli Prime Minister Benjamin Netanyahu while on travel in Jerusalem and said the State Department would work quickly to identify and label organizations it views are anti-Semitic.
“I know this sounds simple to you, Mr. Prime Minister, it seems — it seems like a statement of fact, but I want you to know that we will immediately take steps to identify organizations that engage in hateful BDS conduct and withdraw U.S. government support for such groups,” Pompeo said.
“It doesn’t sound simple — it sounds simply wonderful to me,” Netanyahu followed.
Pompeo also reportedly visited the Israeli settlement of Psagot in the West Bank, the first visit to a settlement by a secretary of State, in a show of support for the U.S. policy that views Israeli settlements as not inconsistent with international law.
The policy is expected to target human rights groups like Amnesty International and Human Rights Watch that, among their activities, focus on how Israeli settlements in the West Bank contribute to human rights abuses against Palestinians and that have come under penalty from the Israeli government for their work in the Jewish state.
Netanyahu and pro-Israel groups have long argued that the BDS movement is an organized effort to delegitimize Israel collectively. They further argue the movement undermines efforts for a two-state solution by calling for international pressure to isolate Israel without concessions from the Palestinians.
Israel passed a law in 2017 that bars entry to any foreigner that supports or takes part in an economic boycott of Israel related to the BDS movement, and a researcher for Human Rights Watch was deported from Israel last year for statements purported to support the BDS movement.
House lawmakers in July 2019 passed a resolution opposing the BDS movement but did not call it anti-Semitic, and efforts to legislate against participating in the movement are stalled over concerns of First Amendment rights.
At least 27 states have legislation against the BDS movement, according to Human Rights Watch, broadly blocking the state from engaging with individuals or entities that engage in the movement.
Yet supporters say the right to boycott, in particular in the U.S., is protected under the First Amendment and is part of efforts to reject Israeli settlements in the West Bank that much of the international community considers illegal
Pompeo on Wednesday reinforced the view by the Trump administration that Israeli settlements are not illegal, updating State Department guidelines to label goods as “Made in Israel” for those produced in Israeli settlements in Area C of the West Bank — under Israeli civil and military control as part of the Oslo Accords — and exported to the U.S.
Israel disputes the characterization of settlements as illegally occupied, and Pompeo reversed in November 2019 a State Department legal opinion that viewed the settlements as illegal.
The move to identify and label organizations as anti-Semitic was first reported last month by Politico, which found the effort was largely based on research from the organization NGO Monitor, an Israel-based research institute that investigates nonprofit ties they view as compromising and influencing the purported mission of the organizations.
In a statement Thursday, NGO Monitor welcomed the State Department’s new directive, saying equating BDS with anti-Semitism echoes the International Holocaust Remembrance Alliance’s (IHRA) working definition of anti-Semitism, which defines attempts to deny “the Jewish people their right to self-determination” and apply “double standards” as anti-Semitic.
“Combating antisemitism and ending the exploitation of universal human rights are both issues of great importance, and the need to address these objectives should transcend political divisions,” the organization said in its statement. “In this context, NGO Monitor has called for governments, as well as NGOs, to adopt the IHRA working definition of antisemitism.”
In annual reports, NGO Monitor frequently takes issue with the work in Israel by Amnesty International and Human Rights Watch, two organizations believed to be targeted by the State Department’s announcement.
Both Amnesty International and Human Rights Watch say they don’t receive any funding from the State Department and that they don't support the global BDS movement. They warn that if they are labeled anti-Semitic, it would give permission to other governments that abuse human rights to dismiss their work and reports.
“The Department of State’s targeting of groups advocating for using peaceful means, such as boycotts, to end human rights violations against Palestinians as antisemitic violates freedom of expression and is a gift to those who seek to silence, harass, intimidate and oppress those standing up for human rights around the world,” Bob Goodfellow, the interim executive director of Amnesty International USA, said in a statement on Thursday.
“This is simply the latest attack from a US government determined to undermine the universality of human rights and the global fight against racism and discrimination, including antisemitism.
The Anti-Defamation League also reacted last month to the expected State Department announcement, opposing broadly applying the anti-Semitism label to human rights organizations. While it did not name Amnesty International or Human Rights Watch directly, the ADL said it did not always agree with certain groups in their approach to Israel, calling their work “excessive and unfair.”
“Nonetheless, we strongly believe that these organizations are crucial to ensuring robust civil society and democratic protections worldwide. To suggest that these groups are somehow constitutionally anti-Jewish is plain wrong. It would be shortsighted and counterproductive for the State Department to blacklist them in this way,” the statement read.
World