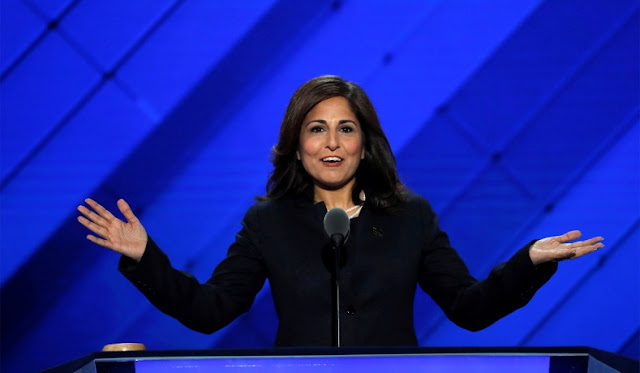 Just what was the Biden team thinking, nominating Neera Tanden, chief executive of the Center for American Progress, to be the director of the Office of Management and Budget? Earlier today, I mentioned stories about her blurting out the name of an anonymous sexual-harassment victim in an all-staff meeting, physically pushing someone for asking her about the Iraq War, and for declaring, “I would do whatever Hillary needs always. I owe her a lot. And I’m a loyal soldier” and, “I don’t really think the issues matter” in emails revealed by WikiLeaks.
I hadn’t mentioned various other factors that may irk Democrats, such as her organization’s center accepting nearly $2.5 million from the United Arab Emirates to fund its National Security and International Policy initiative, or her hosting of an interview of Israeli prime minister Benjamin Netanyahu, or her Twitter fights, or her former employees who say she’s a bad leader. I hadn’t mentioned various factors that may irk Republicans, such as her theorizing that Russian hackers changed votes for Hillary Clinton to votes for Trump. And Republican senators are likely to remember every last attack she’s ever made against them.
Wherever you stand on the political spectrum, you can find a reason to dislike Tanden. I suppose in that sense, she is a uniter, not a divider.
Tanden stands out from the rest of Biden’s picks because so far, the vast majority of the Biden team selections are fairly conventional establishment-heavy veterans of the Obama administration – Ron Klain, Janet Yellen, Anthony J. Blinken, Avril Haines. Not everyone in Washington likes these other nominees, but they aren’t verbal bomb-throwers who have made a lot of enemies on Capitol Hill the way Tanden has. Senate Republicans may not particularly agree with the rest of the Biden team, but they’re not likely to go to the mattresses over most of them.
The director of the Office of Management and Budget must be confirmed by Congress. If Biden had wanted to make Tanden a White House staffer — in a job that doesn’t require Senate confirmation — he could easily have done that. But he didn’t.
She’s a glaringly terrible pick from a team that hasn’t had any other glaringly terrible picks. In fact, she’s so bad . . . you have to wonder if she really could be the designated “sacrifice to the nomination gods,” as Mitch McConnell’s former chief of staff joked. (Was he joking?) Is it possible Biden or someone on his team is shrewd enough to nominate Tanden as a lightning rod, and to ensure Republican senators focus their attention on an OMB director nominee, instead of other cabinet nominees?
Opinion