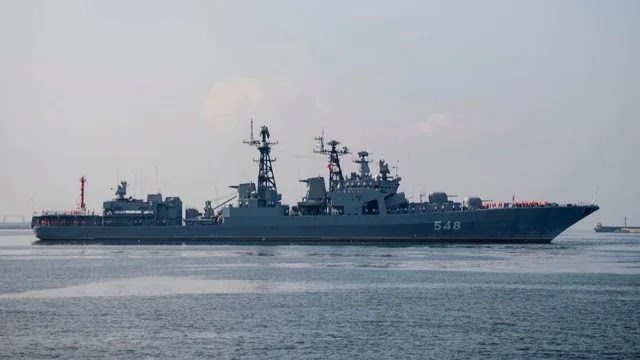 A Russian naval vessel threatened to ram a U.S. warship navigating through disputed waters in the Sea of Japan.
Russia's claims on the area have been a hot-button issue since the Soviet era. The country claims that it has sovereignty over the area that spans beyond the 12-mile mark from the Russian coastline that is guaranteed by international law, according to CNN.
The United States does not recognize Russia's claims on the area, according to the outlet.
The Russian Defense Ministry (RDF) released a statement alleging that the USS John S. McCain violated Russian water, adding that the U.S. was issued a warning from the admiral of a Russian anti-submarine destroyer threatening to ram the American ship to remove it from the area.
After the threat, the RDF maintained that the U.S. vacated the area, a claim that the U.S. denied.
"The Russian Federation's statement about this mission is false. USS John S. McCain was not 'expelled' from any nation's territory," Lt. Joseph Keiley, a spokesperson for the Navy's Seventh Fleet, said in a statement.
"Russia has continued the U.S.S.R. claim," the statement said. "By conducting this operation, the United States demonstrated that these waters are not Russia's territorial sea and that the United States does not acquiesce in Russia's claim that Peter the Great is a 'historic bay' under international law."
The incident comes as Russian President Vladimir Putin has not yet recognized President-elect Joe Biden as the 2020 election victor.
Russia unleashed a sweeping social media influence campaign before the 2016 election, according to a report from former special counsel Robert Mueller. Several cyber government officials have also reported attempts by Russia to influence the American public leading up to the 2020 presidential election.
World