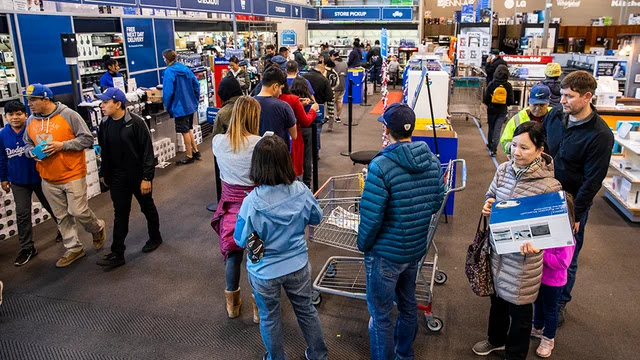 Black Friday will have a different look and feel this year as businesses impose new safety measures for shoppers and employees amid a surge in coronavirus cases.
Major retailers are still moving ahead with in-store events that are likely to draw large crowds after Thanksgiving, even though public health experts are urging Americans to avoid travel and limit their holiday gatherings to household members.
The annual shopping event carries more anxiety this year and the potential for standoffs over mask requirements as national chains take a tougher stand on facial coverings for customers.
Some health experts argue that even with new measures in place, such as reduced capacity and sales spread out over several days, the risk is too great.
“The simple answer is people shouldn’t be going to stores,” said Neil Sehgal, an assistant professor of health policy and management at the University of Maryland School of Public Health.
“Earlier in the summer I would have said, ‘If you need to go to Home Depot or grocery shopping, it’s OK to shop in person.’ We’re not at that point in the pandemic right now. There are parts of the country right now that are on fire, where case positivity is so significant that contact tracing is not efficient,” he added.
More than 250,000 people in the U.S. have died from COVID-19, and almost every state is seeing spikes in cases and hospitalizations heading into the winter months, when public health officials warn of even more infections.
Shoppers appear to be altering their plans as a result.
Fewer than half of U.S. consumers said they planned on hitting up department stores in person this holiday season — 45 percent compared to 53 percent in 2019, according to a National Retail Federation (NRF) survey conducted last month.
“The images we normally see on Black Friday of packed parking lots, long lines and shoppers shoulder-to-shoulder in search of the best deal will only serve to turn people off this year,” said Tyson Cornell, consumer markets leader at PwC.
Stores are adapting to the reality of Black Friday in a pandemic by limiting hours, extending sales and encouraging online shopping.
“I think that everybody understands that this Black Friday is going to be unlike any Black Friday that we’ve ever had,” said Bill Thorne, senior vice president of communications and public affairs at NRF.
Some stores are offering deals for several days on each end of Black Friday, which falls on Nov. 27 this year. Macy’s is putting items on sale from Nov. 16 to 28, while BJ’s Wholesale Club will make its Black Friday deals available Nov. 20-30.
Thorne said extended sales can help ease consumer anxiety.
“Not discouraging people from going into stores but removing the stress from people thinking: Is there going to be a crowd in the store? Will they have what I need? Will I get the sale?” he said.
Some of those extended sales, however, may end up competing with Small Business Saturday, when consumers are encouraged to shop at smaller shops and retailers the day after Black Friday.
Earlier in the pandemic, many small businesses found themselves needing to create better websites and arrange curbside pickup to stay afloat when many establishments were closed to in-store shopping due to government restrictions.
They’re now facing the prospect of fewer shoppers during a time of year that usually accounts for much of a small business’s annual revenue.
For nationwide chains, the crowds this time around may not be as big as Black Friday events in recent years, but Sehgal said there’s still “the likelihood of crowds indoors with a greater density than we’ve seen up to this point.”
“Between now and at least the end of the year, the most significant risks that individuals have of contracting COVID is spending time indoors with any one from outside their household,” he added.
Retailers, the majority of which issued mask mandates in July for all U.S. locations, have recently imposed tighter rules in hopes of improving safety for shoppers and employees.
Costco, which issued a mask mandate in May, updated its policy this month to require people with a medical exemption from wearing a mask to instead wear a face shield in all of its U.S. stores.
Sehgal said there are other safety precautions retailers could put in place.
“For next month and next year, there are things that retail establishments can do, but they’re not going to be ready for Black Friday,” he said, pointing to steps like improving the air quality in stores and other air sanitation measures.
The mask requirements could have the effect of turning off some people who might not want to risk getting caught up in any aggressive confrontations between shoppers and employees over facial covering rules.
“Catching COVID while shopping is consumers’ chief concern this holiday season, and the overwhelming majority of shoppers have told us they want to see retailers implement safety procedures like mask requirements, capacity restrictions, and regular store cleanings,” Cornell, of PwC, said.
Local