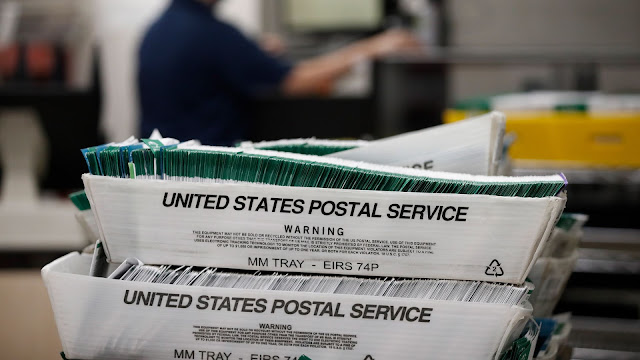 The U.S. Postal Service failed to meet a court-imposed deadline Tuesday afternoon for the urgent processing of some 300,000 mail ballots that had not been delivered to election offices as deadlines neared.
U.S. District Judge Emmet Sullivan, who set the deadline, said it appeared the Postal Service (USPS) had failed to comply with his order, and told the organization to be prepared to discuss the matter at a noon hearing Wednesday.
Meanwhile, the Postal Service said it was working as “expeditiously as possible” as mail ballot deadlines closed in and threatened to disenfranchise voters. Dozens of states require mail-in ballots to arrive by the close of polls on Election Day, with late-arriving ballots being tossed.
Sullivan ordered the Postal Service to sweep facilities in regions with particularly sluggish delivery times, and told the agency to complete its work by 3 p.m. in order to rush deliver any lingering ballots.
But the Postal Service said the deadline was too difficult to meet.
“Given the time constraints set by this court’s order, and the fact that Postal Inspectors operate on a nationwide basis, defendants were unable to accelerate the daily review process to run from 12:30pm to 3:00pm without significantly disrupting preexisting activities on the day of the election, something which defendants did not understand the court to invite or require,” it wrote in a filing.
Samuel Spital, the litigation director at the NAACP Legal Defense Fund, one of the groups suing the USPS, said the blown deadline underscored why lawsuits were necessary to begin with.
“USPS’s failure to fully comply with today’s order from a federal court is unacceptable, and demonstrates precisely why oversight has been necessary to ensure that all ballots are delivered in a timely fashion,” he said. “Judge Sullivan has issued several orders over the past week designed to ensure that fundamental goal is satisfied.”
The court battle comes as a record number of Americans have already cast their ballots for Tuesday’s elections through the mail as a safety precaution during the coronavirus pandemic.
Data the USPS disclosed in court filings this week showed roughly 300,000 ballots that had entered the mail system had not been scanned to indicate their delivery.
Sullivan’s Tuesday order included areas within the battleground states of Pennsylvania, Michigan, Georgia, Texas, Florida and Arizona, where polls have shown a tight race between President Trump and Democratic nominee Joe Biden.
With the exception of Pennsylvania and Texas, each of those states requires that mail ballots be received by the close of polls on Election Day, meaning late-arriving ballots would not be counted.
Pennsylvania’s Nov. 6 mail ballot due date is also subject to change, after three conservative Supreme Court justices last week held open the possibility of taking up a GOP appeal after Election Day that, if successful, would invalidate any ballots arriving after Nov. 3.
Texas will accept mail ballots postmarked by Election Day and received by 5 p.m. the following day.
“Some voters will be disenfranchised because their ballots will arrive late,” said Rick Hasen, a law professor the University of California Irvine, on the Election Law Blog. “While that happens every year, it is worse now because of USPS delays.”
Sullivan, who has presided over several lawsuits aimed at election mail delays, previously ordered the Postal Service to restore high-speed mail sorting machines at facilities that cannot process first class election mail efficiently amid the coronavirus pandemic.
He also ordered the USPS to immediately reverse limitations on mail collection that had been put in place by Postmaster General Louis DeJoy, commanding the agency to inform workers of the court's changes.
DeJoy issued sweeping operational changes in June and July, citing cost-cutting measures during the pandemic. The alterations included changes to personnel, overtime pay for postal workers and removing mail sorting machines.
However, the changes drew bipartisan backlash from those who accused DeJoy, a major GOP donor and Trump ally who took over the role in June, of trying to use the changes to help the president win reelection.
National