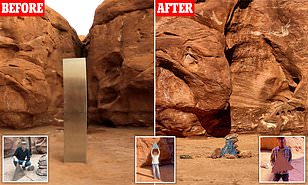 The mysterious metal monolith discovered earlier this month in a remote area of Utah has disappeared, less than a week after the structure was confirmed by state officials.
The Bureau of Land Management in Utah said in a Saturday statement that it received “credible reports” that the three-sided monolith was removed Friday evening from the area of public lands in southeastern Utah where it was initially discovered on Nov. 18.
The bureau said it did not remove the structure and that the local sheriff’s office would be responsible for investigating the removal.
However, the San Juan County Sheriff’s Office shared on Facebook that it does “not have the proper resources to devote much time to the appearance and subsequent disappearance/theft of the structure.”
The sheriff’s office jokingly said that if a member of the public recognizes “anyone from the lineup provided,” they should contact the authorities, alongside a photo of alien creatures.
All that was left of the strange structure on Saturday was a triangular piece of metal that used to be on the top of the tower, The Salt Lake Tribune reported.
The monolith was initially discovered by Utah officials during a mission to count sheep. The Utah Department of Public Safety confirmed last week that crew members with the department’s Aero Bureau were working with the Utah Division of Wildlife Resources to count bighorn sheep in a southeastern portion of the state when workers spotted the object and investigated it.
The discovery quickly went viral, and some people traveled to see the monolith despite its remote location, the Tribune reported. Bureau of Land Management officials did not disclose the exact whereabouts of the monolith due to its isolated location and to protect potential visitors from being stranded or having to be rescued.
Officials previously said that the monolith was likely a work of art, although it was not clear who installed the structure when it was placed on the public lands in the state.
National