More than 150 arrested in London during anti-lockdown protest 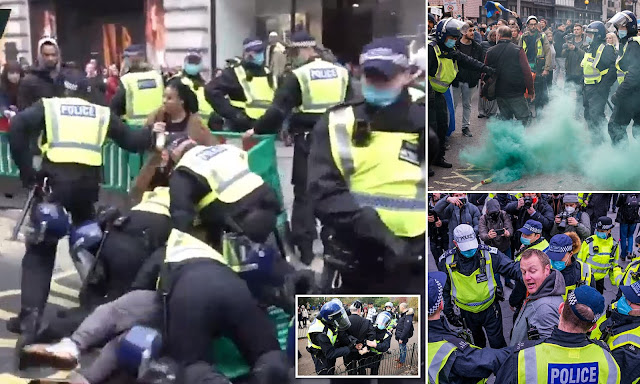 More than 150 people were arrested on Saturday during an anti-lockdown protest in London, the Metropolitan Police announced.
The Met said that arrests were made for breaching coronavirus regulations, assaulting a police officer and possessing of drugs. Law enforcement added that officers made several attempts to prevent people from gathering and to urge people to go home.
The Met warned on Friday that the protests break the law, adding that it had a “robust policing plan in place throughout the weekend.”
“Today’s enforcement action is a direct result of those individuals deliberately breaking the law and at times, targeting our officers with aggression and causing disruption to the road network,” Chief Superintendent Stuart Bell said in a statement on Saturday.
The arrests come as many countries in Europe have seen spikes in coronavirus cases with the approach of the colder months. Countries such as Germany and Italy have clamped down on restrictions in recent weeks ahead of Christmas.
England is currently in a monthlong lockdown that began Nov. 5, which closed nonessential businesses and allowed people to leave their homes only for work and other necessities. Officials plan to lift those restrictions on Dec. 2 and enforce restrictions specific to certain regions.
However, more than 55 million people would still remain under tighter restrictions, the BBC reported this week, with London and the Liverpool city region being in the second-highest tier.
More than 1.6 million coronavirus infections have been reported in the U.K. since the pandemic began, according to data from Johns Hopkins University. More than 58,000 people have died.
World