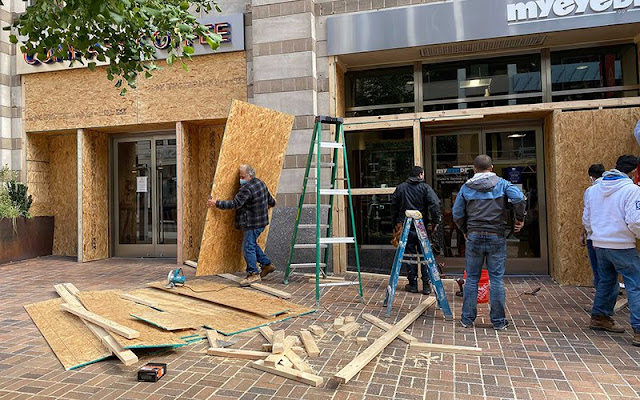 Federal law enforcement agencies are bracing for possible unrest over the outcome of the 2020 presidential election, following a highly divisive presidential campaign season.
The National Security Integration Center (NSIC), a key national security and counterterrorism component within Immigration and Customs Enforcement (ICE), warned in an internal email late last week about planned protests inside the Beltway, according to text of the email obtained by The Hill.
“From November 4 – 7, Civil Unrest is planned throughout Downtown Washington DC. LE Intelligence Agencies have monitored several messages on protesters’ social media sites stating, ‘If you want to throw down come to Washington DC on November 4th,’” reads one of the bullets in the email.
In a sign authorities are preparing for the worst, a "non-scalable" fence has been erected around the White House ahead of Election Day to create a buffer should protests turn violent. And businesses in D.C. and across various U.S. cities are boarding up their windows to help protect storefronts from the risk of looters and vandalism.
No matter the result, the chances of violence appear to be rising amid clashes between supporters of the two presidential candidates.
Pro-Trump demonstrators held up traffic in New Jersey and New York over the weekend, while another group of Trump supporters surrounded a Biden campaign bus in Texas. Clashes between people supporting and opposing the president were also reported in New York City.
Over the weekend, three people were shot in Topeka, Kansas, amid a confrontation over individuals allegedly stealing political signs supporting Trump and local Republicans, The Topeka Capital-Journal reported. The newspaper says police would not specify who was thought to have fired the shots at whom.
President Trump has repeatedly assailed mail-in ballots as creating widespread voter fraud — despite a lack of evidence proving this to be the case — while seeking to undermine the fairness of the election by warning his supporters that it will be a "rigged" election.
He has also refused to agree to a peaceful transition of power, while failing to condemn such groups as the Proud Boys, a far-right group that has embraced political violence.
And amid an unprecedented number of Americans voting by mail this year, after states expanded their options for early voting due to the pandemic, there is also the possibility that the winner of the presidential race may not be declared on election night, which has some political observers scared that tensions will bubble over as more days pass.
D.C. leaders are promising that they are working to ensure safety in the city, particularly if there are delays in counting and processing the ballots under various state deadlines.
“We are all looking forward to every vote being counted, no matter how long it takes,” D.C. Mayor Muriel Bowser said Thursday at a news conference, adding that they are “preparing to ensure the city’s safety."
Bowser also encouraged peace and patience as the nation awaits the election results to roll in, while acknowledging that “some people would like to cause mayhem or trouble."
The fear of political violence comes during an election year that has been defined by a devastating pandemic and racial justice protests that have erupted intermittently across the country for months. And D.C. is just one of the U.S. cities where protests may bubble over into violence.
“There is no secret that this election is more contentious than in years’ past,” Terence Monahan, the chief of department at the New York Police, said at a press conference last month, according to reports.
The American public also appears to be expecting violence to break out on some level.
A majority of voters — about 75 percent — say they are concerned about the possibility of violence on Election Day and afterwards, with 36 percent saying they are “very concerned” and 39 percent saying they are “somewhat concerned,” according to a poll from USA Today/Suffolk University released Thursday. Of those who described themselves as concerned, 40 percent of them identified themselves as Democrats and about 36 percent identified themselves as Republicans.
The world is also watching how events unfold in the U.S.
Australia’s Department of Foreign Affairs and Trade is cautioning Australians against traveling to the U.S. over potential violence as a result of the election.
While the advisory had been in effect as a result of the ongoing health risk of COVID-19, Australia recently edited the warning to include the potential risk of violence in the U.S.
“Protests and demonstrations continue in several US cities,” reads the warning. “Avoid areas where protests are occurring due to the ongoing potential for violence.”
National