Impeachment is a political option in Washington: In Texas, not so much 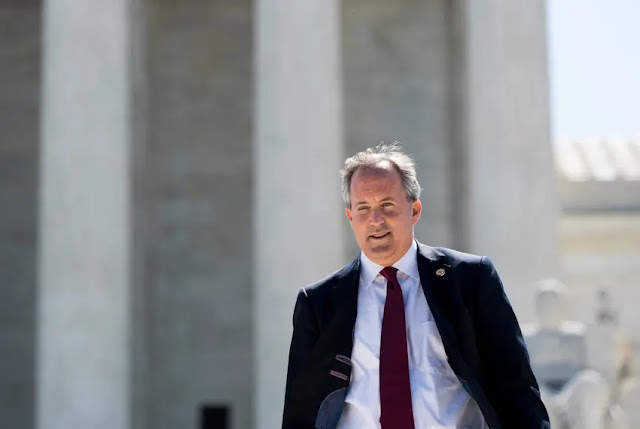 By Ross Ramsey
In a political environment like Washington, D.C., the kinds of legal perils encircling Texas Attorney General Ken Paxton might be grounds for firing, impeachment or congressional investigation.
Paxton, indicted more than five years ago on securities fraud charges, has not yet had his day in court. And another, more current investigation stems from allegations from eight of his top aides that his help for a campaign donor has crossed into bribery and abuse of office. Four of those aides — all eight have left the agency, voluntarily and involuntarily — filed a whistleblower lawsuit Friday, saying they were punished for reporting Paxton’s activities to law enforcement. Paxton told Austin TV station KXAN on Friday that retribution wasn’t involved, instead crediting “legitimate issues unrelated to me that ended up resulting in their termination.”
In times like these, Texas usually relies instead on voters, law enforcement and criminal courts.
Paxton doesn’t have a boss who can fire him. Texas voters put him in office, and in the normal course of things, they’re the ones who’ll decide whether he can stay there. Firing isn’t an option, if it comes to that. He could quit, but that’s unlikely, even with his biggest local paper — The Dallas Morning News — calling for his head on a platter.
The courts aren’t involved in the latest case — not at this point. And the trial on his securities fraud indictment has been stalled for so long people sometimes forget it’s even there. That particular elephant in the room has become just another piece of the political furniture.
Voters won’t get a crack at Paxton until 2022, when he’s up for reelection or an attempt at higher office. Because of his legal issues, he’s already attracted at least one real opponent and another who might be an opponent. Former Galveston Mayor Joe Jaworski, a Democrat, wants to run for AG. And Texas Land Commissioner George P. Bush, a Republican, recently said through an aide that he will “keep all options open” when asked whether he’s interested in the job. Bush’s aide, Ash Wright, added a stinger: “Like many conservative leaders around the state, he is very concerned about the allegations regarding Paxton.”
Paxton’s own executive staff put law enforcement on the case a little over a month ago. Law enforcement hasn’t officially reported anything back — including whether there is an investigation or not.
Because state lawmakers have gone through two full legislative sessions with an indicted attorney general, it doesn’t seem likely that they would consider impeachment. Paxton is hardly the first elected official in Texas to continue to serve while indicted. He’s not even the first attorney general in modern times: Jim Mattox, who served from 1983-91, was indicted and acquitted on commercial bribery charges early in his first term. Legislators let it play out in the courts. Mattox was reelected once and later ran unsuccessfully for governor and the U.S. Senate.
Impeaching someone in Texas isn’t like impeaching someone in Washington, D.C. It’s rarer, for one thing, and it has immediate consequences in a way that the federal system does not. The person being impeached is removed from office while the case is pending in Texas; in the federal system, they remain in office unless convicted by the Senate.
So what does that mean here? If a state official was impeached by the Texas House, they would be removed from office until after the Senate had held a trial and judged the House’s impeachment. It’s right there in the Texas Constitution: “All officers against whom articles of impeachment may be preferred shall be suspended from the exercise of the duties of their office, during the pendency of such impeachment. The governor may make a provisional appointment to fill the vacancy, occasioned by the suspension of an officer until the decision on the impeachment.”
It’s rare, but it does happen once in a while. Texas Gov. James “Pa” Ferguson was impeached in 1917 for misapplication of public funds and other charges. In 1975, the Legislature impeached state District Judge O.P. Carrillo of Duval County for misuse of public funds, presiding over cases that involved financial partners and a number of other infractions. (One member of the committee that started the proceedings was a second-term House member, state Rep. Senfronia Thompson, D-Houston. She’s still in the House — the last tie to that impeachment.)
But even in that case, the Legislature waited for criminal investigators to wrap up at least some of their work. The House started its work after Carrillo had been indicted on charges of income tax evasion.
This article originally appeared at the Texas Tribune.
Opinion