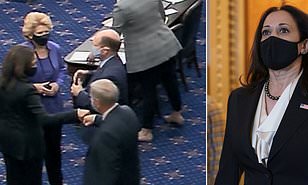 Republican senators on the Senate floor Tuesday congratulated Sen. Kamala Harris (D-Calif.) on her and President-elect Joe Biden's election victory, with Sen. Lindsey Graham (R-S.C.) fist-bumping the vice president-elect.
Sens. Tim Scott (R-S.C.), James Lankford (R-Okla.), Mike Rounds (R-S.D.) and Ben Sasse (R-Neb.) all congratulated Harris on the Senate floor as the chamber voted on Federal Reserve Board of Governors nominee Judy Shelton.
The vote marked the first time Harris has been back to Capitol Hill since becoming vice president-elect.
The congratulatory gesture comes as a number of high-ranking Republicans have not publicly acknowledged Biden and Harris as the president-elect and vice president-elect, respectively. President Trump has continued to claim without evidence that voter fraud was widespread in the presidential election and has not yet formally conceded.
Harris also received a fist bump from Graham, who has reinforced Trump's claims.
“Just saying hello. I haven’t seen her in a while. If it works out and they make it, I told her I wish her well and try to work where we can. We will know here in a month or so or less," Graham told CNN's Manu Raju.
The senator made headlines on Tuesday after Georgia’s Republican secretary of state, Brad Raffensperger, accused the senator of personally pressuring him to exclude some mail-in ballots during a mandatory recount.
Graham has denied that he put any pressure on Raffensperger.
“I’m asking him to explain to me the system,” the South Carolina senator said. “If you send a mail-in ballot to a county, a single person verifies the signature against what’s in the database. They don’t mail out ballots. You got to actually request one. So they expanded mail-in voting, and how you verify the signature, to me, is the big issue of mail-in voting."
National