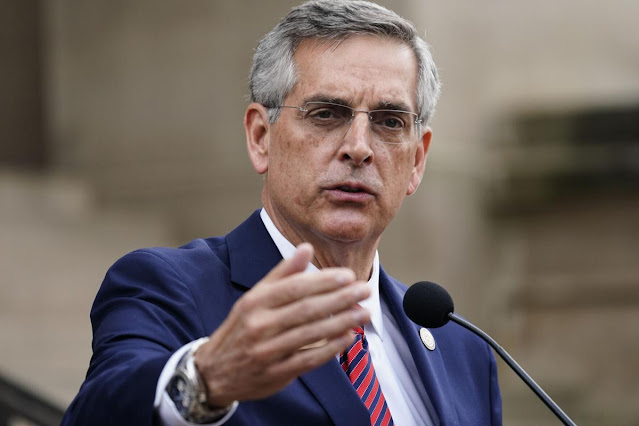 Georgia Secretary of State Brad Raffensperger (R) announced Monday he was opening an investigation into third-party voting groups that allegedly are encouraging people outside Georgia to register to vote in January's Senate runoff elections.
Raffensperger at a press conference named four groups he would be investigating: America Votes, Vote Forward, The New Georgia Project and Operation New Voter Registration Georgia.
“We have opened an investigation into a group called America Votes, who is sending absentee ballot applications to people at addresses where they have not lived since 1994,” said Raffensperger.
In a statement to The Atlanta Journal-Constitution, America Votes said it has mailed applications to those on the list of voters maintained by Raffensperger's office.
“We’re pleased that so many Georgians have already applied to vote by mail this election and will continue our work to make sure every voice is heard in January,” said the group.
Republican incumbent Sens. David Perdue and Kelly Loeffler will face Democrats Jon Ossoff and the Rev. Raphael Warnock in Georgia on Jan. 5. The outcome of the two races will determine which party controls the Senate.
Raffensperger accused Vote Forward of attempting to register a dead woman in Alabama as a voter in Georgia, The New Georgia Project of sending registration forms to people in New York and Operation New Voter Registration Georgia of telling college students to temporarily change their residency to Georgia.
“Voting in Georgia when you are not a resident of Georgia is a felony, and encouraging college kids to commit felonies with no regard for what [it] might mean for them is despicable. These third-party groups have a responsibility to not encourage illegal voting. If they do so, they will be held responsible,” said Raffensperger.
The state’s voting system manager, Gabriel Sterling, said he assumes the groups will claim those incidents as legitimate or accidental.
“But that’s why you investigate,” said Sterling.
According to Sterling, 940,000 Georgians have already requested absentee ballots for the runoff elections, while 1.3 million Georgians requested absentee ballots for the Nov. 3 election.
The results of the presidential election in Georgia have been repeatedly attacked by President Trump and his allies.
Raffensperger, who said he voted for Trump, has stood by the results and has shot back at claims that Georgia's voting system allowed for a fraudulent result. So far, an audit of the voting machines and a hand recount have been conducted, both reaffirming President-elect Joe Biden as the winner.
On Monday, Trump's campaign requested an audit of the signatures on the ballots for the fifth time. Georgia Gov. Brian Kemp (R) has also voiced his support for a sample audit of signatures.
Trump told reporters last week he would travel to Georgia in order to support the GOP candidates in their respective elections.
National