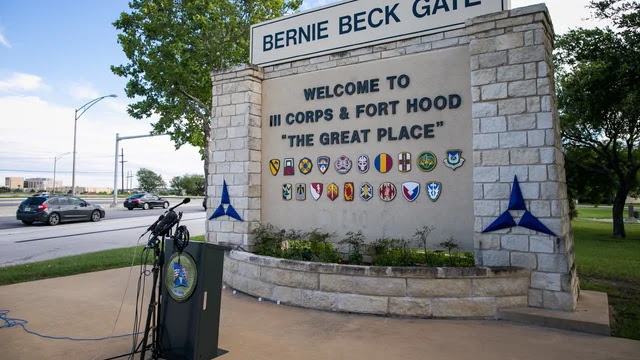 A soldier based at Fort Hood, Texas, has been arrested and charged with murder in the case of a woman killed more than a year ago at a local motel.
Spc. Cory Grafton, 20, was arrested on Tuesday on a warrant for murder in the June 3, 2019, killing of Chelsea Cheatham, 32.
Cheatham was found unresponsive at the Days Inn by Wyndham in Killeen, the town that houses the Army installation.
Officers and paramedics called to the scene were unable to revive her and she was pronounced dead, according to a Killeen Police press release. After an autopsy, her death was ruled a homicide.
DNA evidence and witness testimony led investigators to arrest Grafton, who is assigned to Fort Hood’s 1st Cavalry Division.
A witness first told police that they allegedly saw Grafton at the motel around the time of Cheatham's death.
“With the assistance from the Texas Rangers, DNA from the scene was submitted and the results confirmed that Grafton matched the DNA located on Cheatham,” Killeen Police said in the release. Detectives then obtained a warrant and took Grafton into custody.
Grafton is being held on the charge of first degree felony murder with his bond set at $1 million, according to Bell County inmate records.
Cheatham’s death adds to the numerous high-profile crimes linked this year to one of the military's most troubled installations.
An average of 129 felonies were committed annually at Fort Hood between 2014 and 2019, including cases of homicide, sexual assault, kidnapping, robbery and aggravated assault, according to Army data.
Twenty-eight soldiers have died this year alone at the post, where roughly 36,500 soldiers are assigned.
Other cases that have garnered national attention include the disappearances and discoveries of the bodies of Pfc. Vanessa Guillen, 20, Sgt. Elder Fernandes, 23, Pvt. Mejhor Morta, 26, and Pfc. Gregory Morales, 24.
Guillen went missing in April before her body was discovered in July. Army officials suspect another soldier, Aaron David Robinson, of bludgeoning her to death, though he committed suicide a day after Guillen’s body was discovered.
Fernandes was found hanging in a tree in late August in Temple, Texas, about 28 miles from the base. His family attorney has said he was “humiliated” after reporting sexual abuse, and his death is under investigation.
Morta, meanwhile, was found unresponsive on July 17 near Stillhouse Hollow Lake, a reservoir operated by the U.S. Army Corps of Engineers.
Morales went missing exactly one year before Fernandes, with his remains discovered in June in Killeen. His death remains under investigation.
Following the string of incidents, the Army announced changes to Fort Hood leadership, including the removal of the commander, Maj. Gen. Scott Efflandt, and barred him from a planned position at another Texas base.
Army Secretary Ryan McCarthy in July directed the service to independently review the command climate at the installation.
Texas