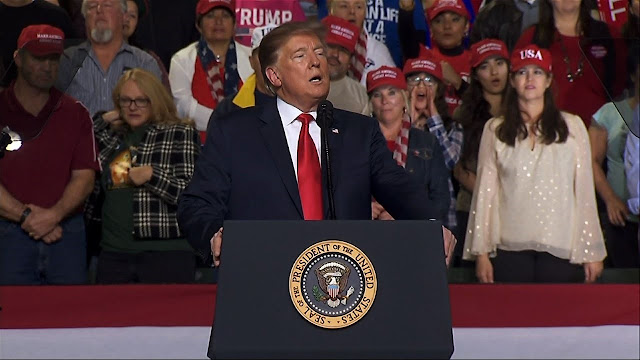 City officials in El Paso, Texas, this week said they would be hiring legal counsel in their fight to obtain more than half a million dollars owed by President Trump’s reelection campaign from a rally held in the city in February 2019.
According to local NBC affiliate station KTSM, the El Paso City Council voted unanimously on Monday to hire the law office of Snapper L. Carr to represent them in an effort to get paid nearly $570,000 in total charges incurred by the Trump campaign.
The campaign initially owed about $470,000 in connection with the February event, mainly from services provided by the city’s police force and fire department during his visit.
However, the city has since added more than $98,000 in late fees to the bill.
“The Trump campaign is likely to face a large amount of debt from the election,” city attorney Karla Nieman said, according to KTSM. “We believe that based on the research and the information that we’ve gathered through the city attorney’s office and the comptroller’s office is the best course of action is to ask Mr. Carr to assist us in collecting the debt.”
The local outlet reported that city Rep. Peter Svarzbein said during a council meeting Tuesday that obtaining the money owed is essential to maintaining the city’s budget, especially as the area, like much of the country, faces a rapid surge in coronavirus infections.
“We all are seeing firsthand the struggles that everyday El Paso families have in addition to the challenges that we have in our own budget,” Svarzbein said. “So this amount of money is not inconsequential and also the message that we send that nobody is above the law is also an important one for our community to understand as well.”
In April of this year, El Paso Mayor Dee Margo (R) suggested that the city could sue the campaign for failure to pay the event fees.
However, Nieman said Tuesday that as of now, the city does not plan on suing the campaign, saying that officials would instead be “using various methods to attempt to collect the debt owed to the city of El Paso.”
Trump held the campaign rally as his first of 2019 as he ramped up efforts to secure billions of dollars for the construction of a wall along the U.S.-Mexico border.
Six city departments, including the fire, health, aviation and police departments, provided services at the rally, according to an invoice obtained by The El Paso Times.
A Trump campaign official said in April that it isn't responsible for city contracts focused on police services.
“It is the U.S. Secret Service, not the campaign, which coordinates with local law enforcement," the official said. "The campaign itself does not contract with local governments for police involvement. All billing inquiries should go to the Secret Service."
Texas