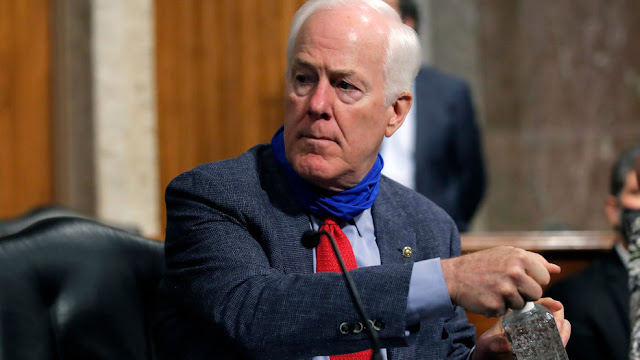 Sen. John Cornyn (R-Texas) said Monday that the outcome of the presidential election is "becoming increasingly clear," and that "evidence of a systemic problem seem to be wanting."
"Obviously, the outcome is becoming increasingly clear," Cornyn said outside a food bank in Austin, Texas, according to an Austin American-Statesman staffer.
"It seems like evidence of a systemic problem with our election seem to be wanting at this point," the senator added.
Cornyn, an ally of President Trump during his first term in the Oval Office, has been among the Republicans who have not yet acknowledged President-elect Joe Biden as the winner of the Nov. 3 election.
Trump has refused to concede, alleging without evidence that widespread voter fraud led to an unfair election.
On Sunday, Cornyn said in a tweet that Biden should be allowed to receive intelligence briefings that are being blocked by Trump's General Services Administration.
Biden's transition team has argued a lack of coordination between the outgoing and incoming administrations poses a national security threat.
All but a handful of Senate Republicans have either outright backed Trump's claims of voter fraud or declined to acknowledge Biden as the next president.
The Trump campaign has filed several lawsuits in various battleground states either contesting the result of the election or attempting to invalidated certain ballots that went heavily for Biden.
Cornyn, who just won a tough reelection fight and retained his Senate seat, said last week that after the legal process of recounts and election-related lawsuits play out Biden would "probably" be the next president.
Texas