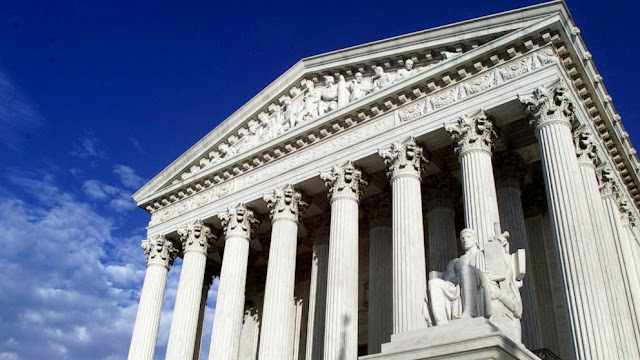 Two conservative justices on the Supreme Court appeared prepared to preserve at least some of the major components of ObamaCare, including its protections for people with preexisting conditions, as they heard arguments Tuesday in a suit challenging the law.
Chief Justice John Roberts and Justice Brett Kavanaugh seemed to express the view that if the court were to strike down the provision of the law mandating the purchase of health insurance, the rest of the law should be allowed to survive.
"Looking at our severability precedents, it does seem fairly clear that the proper remedy would be to sever the mandate provision and leave the rest of the act in place, the provisions regarding preexisting conditions and the rest," Kavanaugh said.
Roberts was somewhat more equivocal but pushed back forcefully against an argument by the solicitor general of Texas, which is among 18 Republican-led states that urged the court to strike down the Affordable Care Act (ACA) in its entirety.
The Justice Department, on behalf of the Trump administration, backed the GOP states on Tuesday in urging the justices to strike down the law. Opposing the effort was a coalition of 20 states, led by California, along with the Democratic-led House.
Prior to Tuesday’s argument, a number of outcomes seemed plausible, including the most extreme scenario, which would involve the 6-3 conservative majority court striking down the entire 2010 law. Doctors’ groups had warned that such a decision would threaten to throw the nation’s health care system into chaos at a time when the country could still be in the grips of the coronavirus pandemic.
Ending ObamaCare would cause some 21 million Americans to lose health coverage. It would also remove protections for 133 million people with preexisting conditions, scrapping regulations that prevent insurers from denying coverage or charging higher premiums based on a person’s health status.
But the sympathetic audience that Kavanaugh and Roberts appeared to give to arguments in favor of leaving intact at least some of the major parts of the law seemed to make the most drastic scenario more remote.
The court’s three more liberal justices were not expected to vote in favor of striking down the law in total. If they are joined by Roberts and Kavanaugh, then the court may only eliminate the mandate. A majority could even choose to also leave that provision intact when the court issues a decision in the case, likely in June.
The challengers argue that President Trump’s 2017 tax-cut law effectively rendered the health care mandate provision of ObamaCare unconstitutional and therefore the entire law should be struck down.
They allege that the law's original design depended on the requirement that most people purchase insurance and set up a tax penalty for noncompliance. The Trump tax cuts zeroed out the penalty, which, according to the litigants, should cause the whole ObamaCare structure to collapse.
But Roberts expressed skepticism over that argument, noting that Republican lawmakers, who for years had promised to repeal ObamaCare, had passed a much narrower measure in the tax cuts.
"I think it's hard for you to argue that Congress intended the entire act [to] fall if the mandate were struck down, when the same Congress that lowered the penalty to zero did not even try to repeal the rest of the act," Roberts said to Texas Solicitor General Kyle Hawkins.
Tuesday’s arguments come just a week after a contentious election in which more than 74 million Americans voted for President-elect Joe Biden, who campaigned on bolstering the Affordable Care Act.
The political ground has shifted at an astonishing rate since the justices agreed in March to take up this latest Republican challenge to the ACA. Since then, the country has gone from enjoying historically low unemployment and fewer than two dozen coronavirus cases to seeing millions of newly unemployed Americans lose job-based health coverage and more than 10 million coronavirus infections across the country.
The makeup of the court has also changed with the September death of Justice Ruth Bader Ginsburg and the confirmation of Justice Amy Coney Barrett last month, giving conservatives a solid 6-3 majority.
For years, Trump and Republicans in Congress have vowed to replace the ACA with a superior health care plan that offered the same protections for those with preexisting conditions. But despite having a decade to develop such a plan — and controlling both chambers of Congress during Trump’s first two years in office — Republicans have been unable to pass a replacement.
National